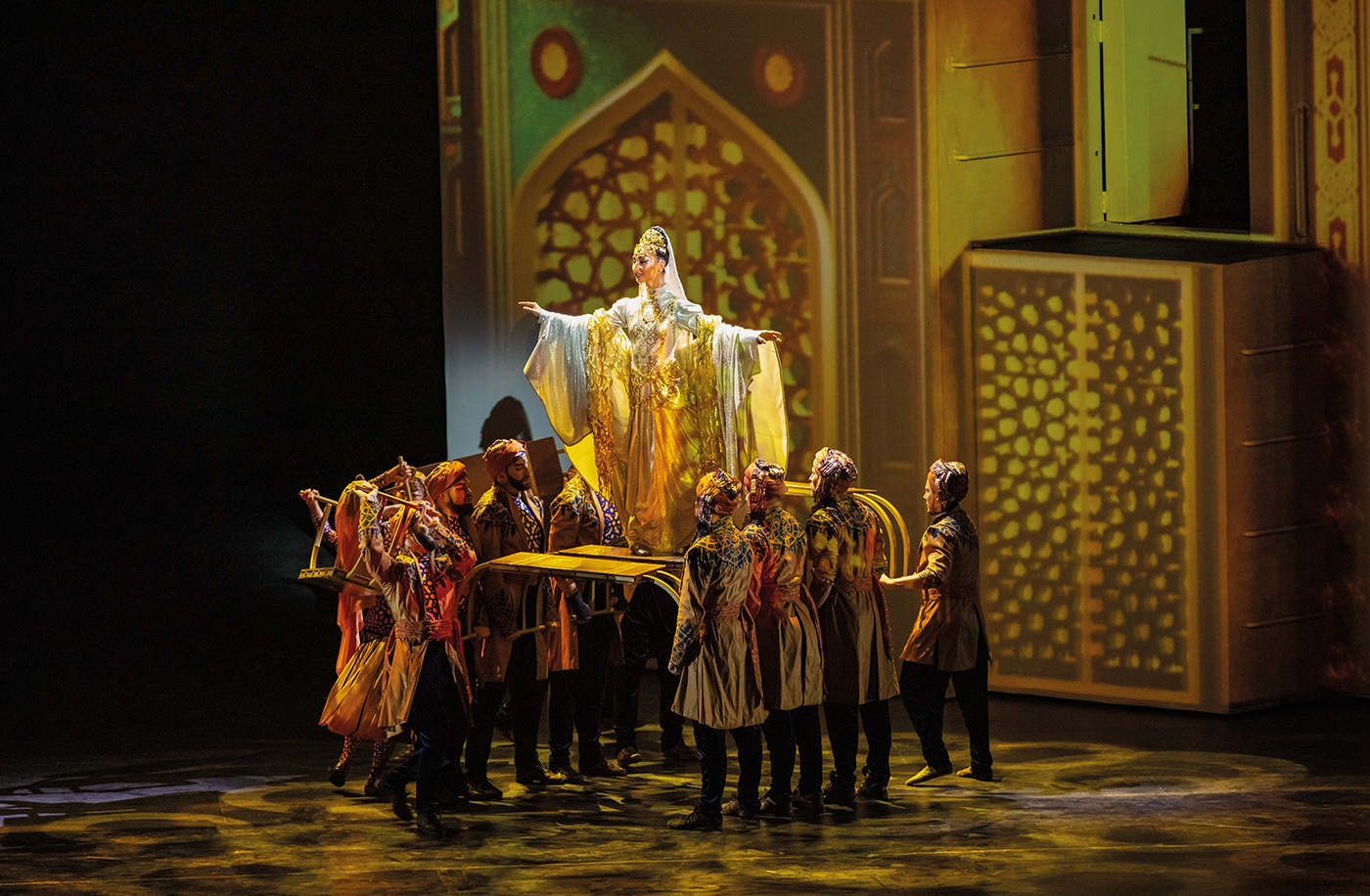 HOW CAN ONE TELL a fresh version of a tale that has captivated people around the world for a thousand years? 1001 Nights: The Last Chapter, which opened at Sharjah’s Al Majaz Amphitheatre on April 23, succeeded by spinning the story forward and going very, very big.

“[This] is set to change the face of live entertainment in the UAE, and will reinvent the genre of performing arts,” Sheikh Sultan bin Ahmed Al Qasimi, head of the Inauguration Ceremony Committee of Sharjah as UNESCO World Book Capital 2019, proclaimed when it was first announced.

Everyone knows how Scheherazade cleverly evades execution at the hands of King Shahryar by telling him a series of cliffhangers over 1,001 nights. In The Last Chapter, we meet her on her death bed, having summoned her three children, Fayrouz, Kader and Amin, to send them off on one final mission.

The original tale is thought to have been the work of many authors, probably from many lands. The new production also resulted from the combination of many international talents. Creative director Philippe Skaff built a mega-team of performers, assembling 557 artists from 25 countries, including talent from Sydney-based creative company Artists in Motion and circus performers from Montreal’s The 7 Fingers.

“It all started with me saying, ‘Sebastien [Soldevila, the director], we don’t want another Scheherazade. Let us start with an old Scheherazade for a change. Now let us rewrite the story,’” Skaff says.

Skaff’s production was an all-encompassing experience in every sense. The amphitheatre was transformed into an interactive stage set across three backdrops: an enchanting garden, an island, and a desert. Huge video screens transported audiences into a whole new world, as acrobats flew through the air, and a 51-piece symphony orchestra provided an ethereal soundtrack. Maxime Lepage composed the original mix of classical and electronic music.

“A show is an overall vibration that penetrates the audience to create emotions,” Skaff says. “The secret of a successful show is for that vibration not to last only for an hour and a half but to leave a lasting imprint on the collective memory of people. I think that The Last Chapter has done that.”

The UAE has always been special to Skaff, who is at the helm of creative collective Multiple International. Over the two decades that he has been coming here, Skaff has watched the arts and culture landscape take shape. At the same venue in 2014, Skaff’s epic Cluster of Light production charted the birth of Islam.

With The Last Chapter, Skaff racheted up “epic” by several notches, bringing Scheherazade’s magical, dreamlike stories to life with stunts, horses, light effects and elaborate costumes cut from a kilometre-long stretch of fabric. The production combined the best human talents in acting, singing and dancing with innovative use of audiovisual technology.

Sharjah’s emergence on the international performing-arts stage isn’t about to slow down. Skaff believes with The Last Chapter, the emirate should be “proud of what it has offered the world.”—CB