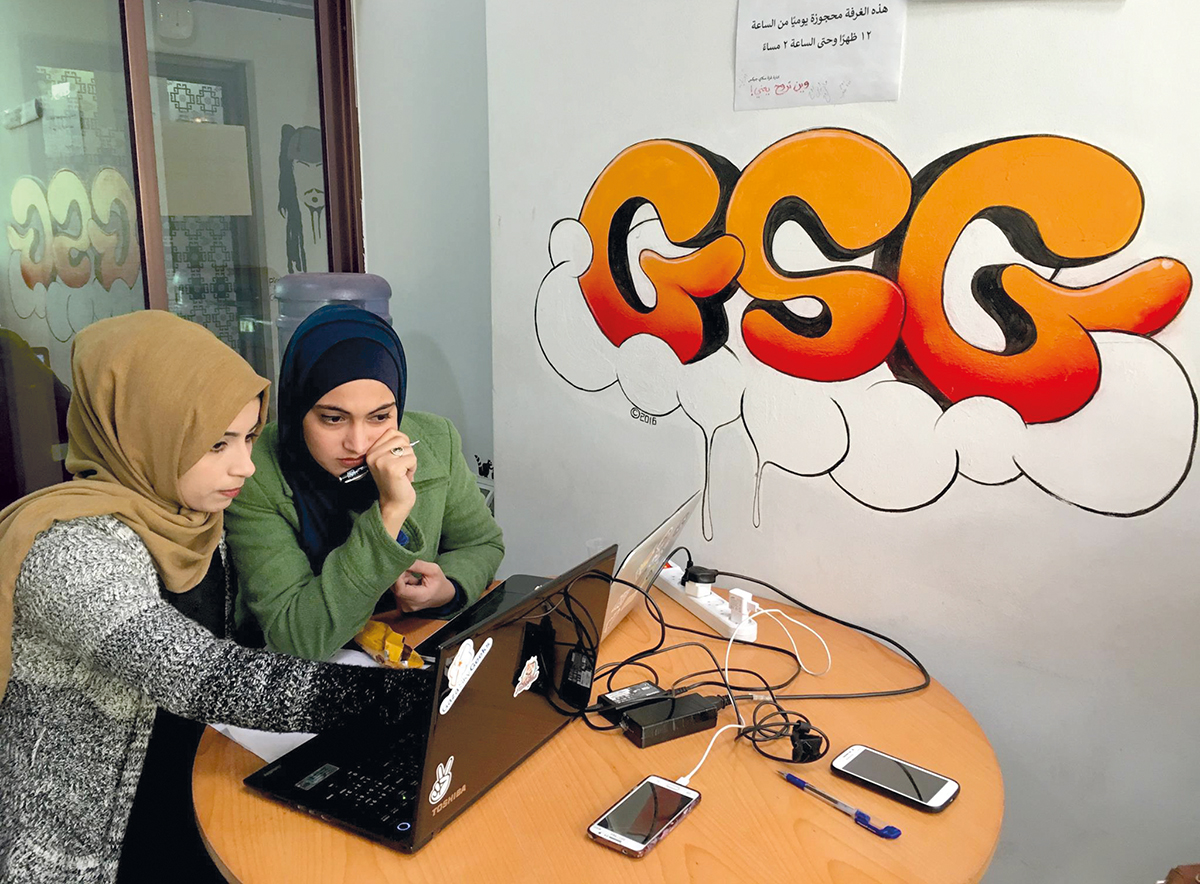 SPACE
For tech-savvy young Gazans like Saleem Summour, the fibre-optic cable running underground is a lifeline. Travel restrictions amid the continuing blockade of the territory have curtailed Summour’s ability to seek work outside of Gaza, but having access to high-speed internet means he can find work online. He has freelanced as a web developer since 2011 and launched his first start-up in 2013.

But his connections—and his ability to reach outside the local market—were limited.

“I was always thinking how can I expand outside of Gaza? How can I go to the Arab market?” Summour says.

He got his chance through Gaza Sky Geeks. The tech hub, launched in 2011 by the international NGO Mercy Corps with seed funding from Google, is one of the oldest and most comprehensive nodes in Gaza’s growing tech scene. The programme’s main centre in Gaza City hosts a co-working space, a coding academy, training for freelancers, and a start-up accelerator programme.

As Gaza has only eight hours a day of electricity—an improvement, Summour says, from the recent past when it was four hours— the 24-hour electricity provided by the centre’s generator is a boon for freelancers. More importantly, the centre offers access to training and mentoring that can be hard to come by in Gaza.

A 2018 World Bank report on the tech landscape in Palestine noted that the territories host some 20 tech accelerators and that the number of start-ups is expanding rapidly. But it noted that the founders, while many are highly educated, “tend to be young and with little experience.”

Gaza Sky Geeks’ American director Ryan Sturgill says the difficulty of travel makes gaining that experience a particular challenge. For Gazans to leave the territory via the Israeli-controlled Erez crossing requires permission from the State of Israel, which is often denied, and the Rafah crossing into Egypt is frequently closed.

“You have access to all the resources of the internet but that’s not, at the end of the day, a substitute for real world experience,” he says. Gaza Sky Geeks, he adds, aims to bridge the gap.

Mohammed Mortaga, a third-year computer engineering student at the Islamic University of Gaza, says he is discouraged by the post-graduation prospects for web developers like him in Gaza. “You can find a job here and find a full-time job, but most of the jobs you find will be at a monthly salary of $400 or $500 which is really, really low compared to worldwide,” he says.

After dropping by one of the weekly coding workshops at Gaza Sky Geeks, Mortaga was excited to find a community of fellow tech enthusiasts and the chance to learn from more experienced developers.

“I was like, this is the place I’ve been seeking for years,” he says. “Immediately, I dropped the semester in the university and signed up for the Code Academy,” a boot camp that teaches coding skills.

Now he’s back in school, working as a freelance backend developer, and giving introductory coding workshops as a volunteer at Gaza Sky Geeks.

The organisation also offers guidance to freelancers working in non-tech fields. Maha Shaath, a freelance English translator living in Khan Younis, south of Gaza City, says that since graduating university in 2012 she had struggled to find clients. “I had little knowledge of how to get a job,” she says.

Summour, for his part, has participated in a number of the centre’s programmes since 2013. Last year, his start-up, Lavender—an automated Arabic website builder and marketplace for Arabic WordPress themes—was selected for the accelerator programme.

At the end of the 16-week programme, he joined nine other start-ups on a roadshow with stops in Istanbul, Cairo, Manama, Amman, Dubai and Berlin.

The tour helped the start-up to land an offer, Summour says, and he and his partner are now close to completing the investment round. Summour attributes the project’s progress to the connections he made through Gaza Sky Geeks.

“If I had to do it by myself,” he says, “I would need many years to do what we achieved in less than one.”