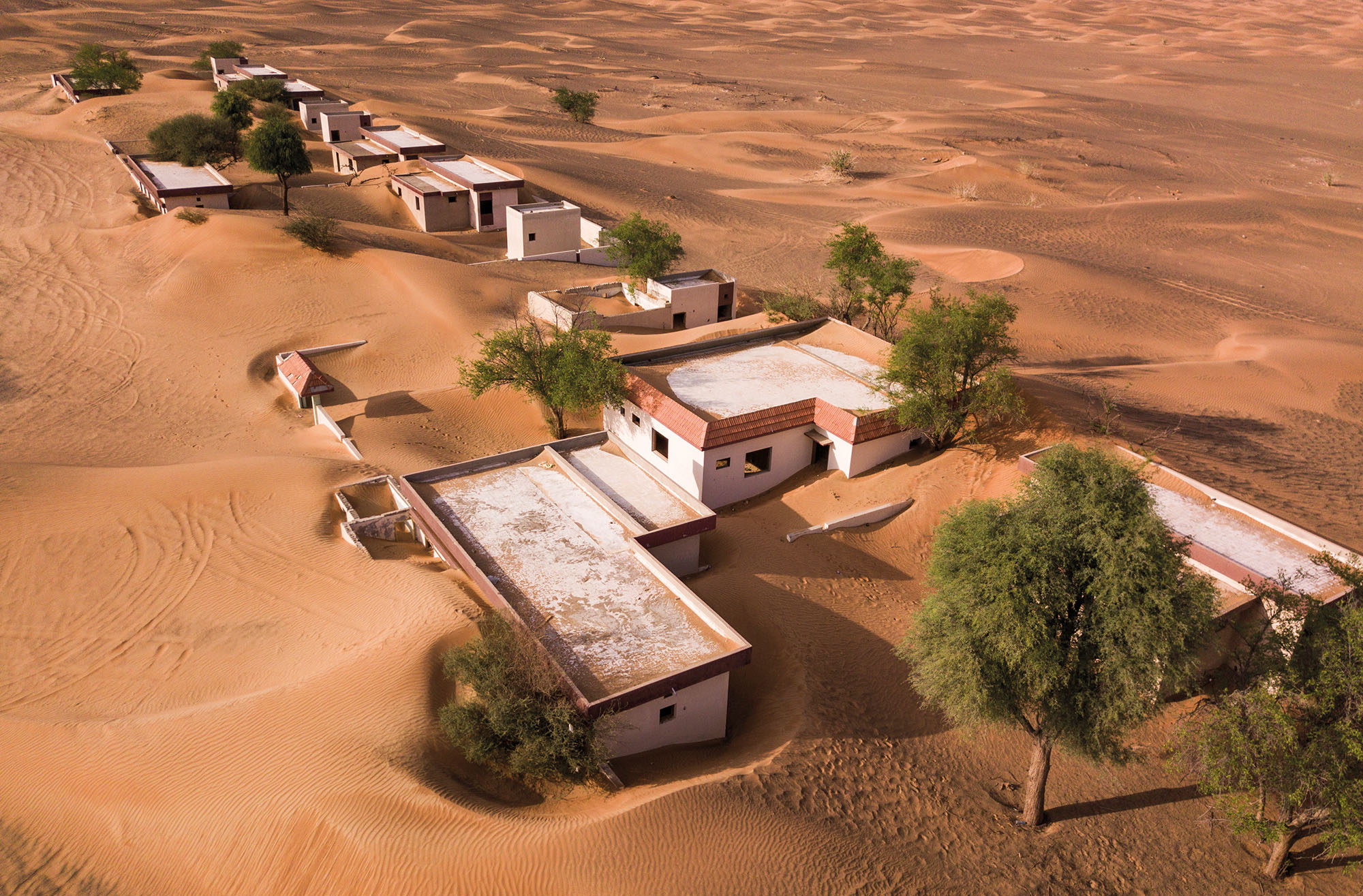 Gone with the wind

Sand swirls in the Sharjah desert around the homes of an abandoned village, erasing traces of its former residents.

What would it take for you to walk away from your home for good? Bad spirits? Ill winds? In the Sharjah desert near Al Madam, a dozen homes sit abandoned, lined up along a single street that ends at a mosque. The homes, built decades ago, remain solid, although their doors and windows are gone. A neat development with trees and courtyards, except that it’s nearly buried in cinnamon-coloured sand. The houses had been occupied by the Kutbi tribe but abandoned, some say because of jinn forces, although they might have been driven out by the invading desert, which has all but engulfed the village.

Dubai-based photographer Shukhrat Gafurov often takes photography tours to the buried village, especially at sunset, when the light is softer and the shadows longer. The wind tends to pick up around 4pm, adding to the air of mystery as the sand plays over the peaks of the dunes.

“The feeling is positive, even though it’s abandoned,” Gafurov says. “You feel very peaceful, first because it’s silent, and second because it’s beautiful.”

The sand dunes swirl incongruously to the ceilings inside homes where wallpaper is still visible. The rippling waves of sand contrasts with the square interiors, offering a juxtaposition of geometries and colours—the reddish brown sand against the blues and greens of the interior walls, undulating dunes against sharp lines of walls and pillars.

In one shot, a couple seem to hover, almost like jinns, in a bare room, where wavy crests of sand disguise the floor. The walls are a pale green like the sea, and the deep green carpet “almost looks like grass. It’s been broken into pieces by time and by people,” Gafurov says.

When he arrives at the buried village, Gafurov likes to first look over the place from a rooftop. “You can see where you are, all the houses, the trees. You can see the endless desert beyond,” he says. He shot from above with drones to “show the abandonment of the place. The houses are being swallowed by sand.”

To capture what one experiences inside the houses, Gafurov overlaid two photos—one with the settings adjusted for outside, which left the interiors too dark to make out, and the other adjusted for inside, which made the view overexposed to white-out. The overlay isn’t to do tricks, he says, but to offer what the human eye perceives—the delicate blue walls, with rippling sand rising on one side, while, through the two large windows, the sand continues, seamlessly, like an inundating sea, toward the neighbouring house.

The spot has become popular with Instagrammers, but, he says, “the wind will erase all the traces and in an hour it will be pristine again.”