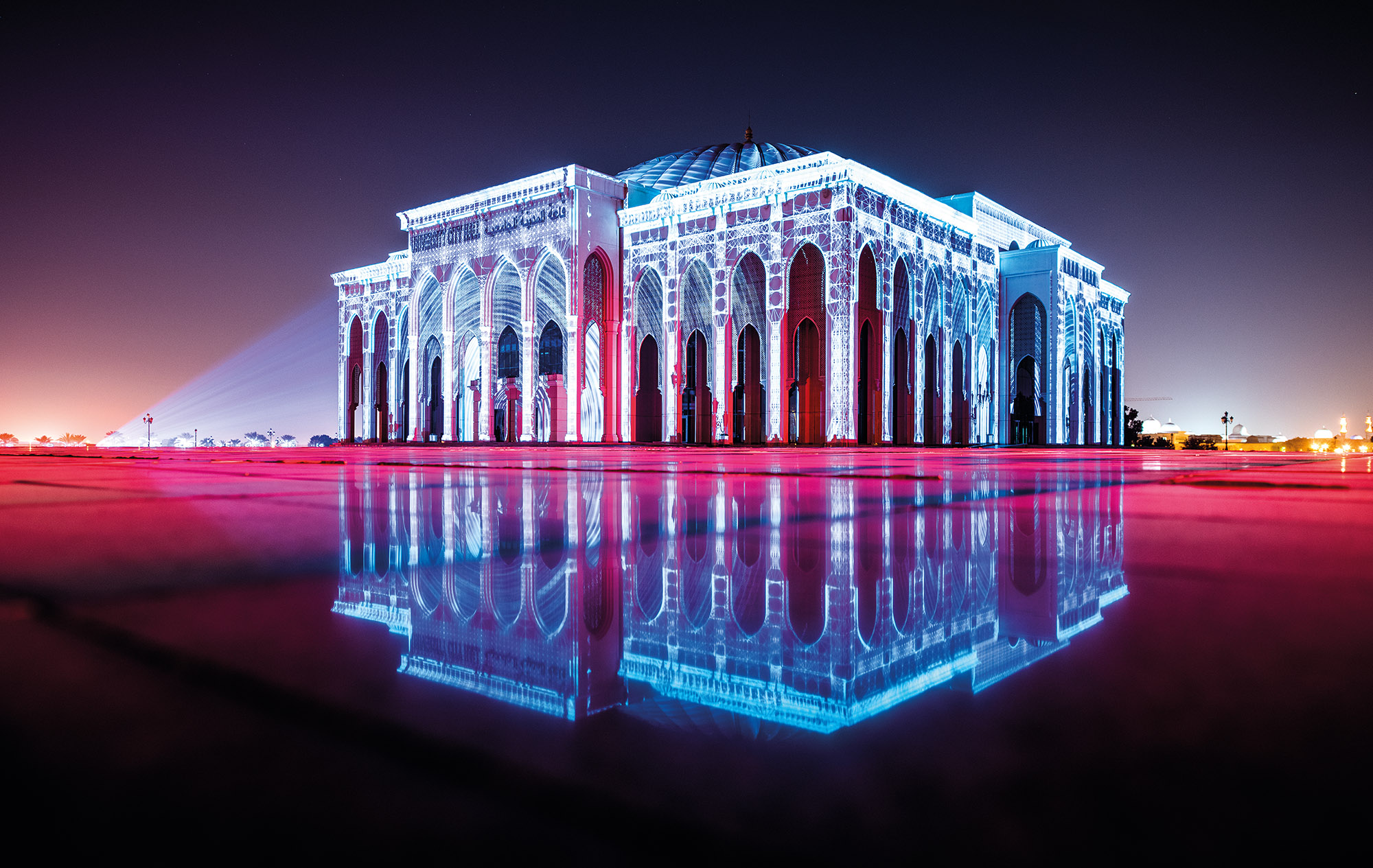 The festival illuminates some
of the city’s most iconic landmarks,
including Sharjah University buildings.
Sharjah Light Festival

A journey of lights

Sharjah invites renowned artists to celebrate science and creativity in a display of light, colour and music at iconic landmarks.

The Sharjah Light Festival—one of the biggest events in a city known for its big cultural output—will return for its 10th anniversary in February. Each year, the festival bathes the city’s government buildings, mosques and open spaces in light and colour, creating a wonderland for visitors and sending photographs of its rainbow skyline beaming out around the world. Artists come from all over to participate, but the event is really about celebrating Sharjah, whether that be its Islamic architecture, its history, its environment, or its enduring connection to subjects such as astronomy and music.

They’re weighty themes, in some circumstances, but they’re made approachable when the medium is multistorey animations, lasers, fireworks and other dizzying, dazzling light art. Audiences have embraced the festival, which started in 2011 with a single installation and was soon drawing comparisons to Sydney’s famous Vivid festival. In 2019, it grew to 17 locations and drew 1.2 million visitors—a record 10% increase over the previous year.

With such success and a milestone birthday to mark, it’s fair to expect something huge from this year’s 11-day festival. The event is put on by the Sharjah Commerce and Tourism Development Authority (SCTDA), whose chairman, His Excellency Khalid Jasim Al Midfa, promises this year’s edition will be “bigger and better than ever,” in part thanks to new technologies. Al Midfa’s vision drives the festival, and he is passionate about what he sees as a singular event and a major driver of tourism to Sharjah.

“The combination of historical landmarks plus modern innovations and technology is an element unique to the Sharjah Light Festival,” he says. “We highlight the Emirates’ achievements and reflect its excellence in all matters related to education, knowledge and innovation, literally turning technological advancements in the field of lighting into beautiful displays.”

The 2020 plans are secret in the run-up to the event, but so far every year has brought a new location or feature. In 2014, when Sharjah was named the Capital of Islamic Culture, organisers introduced a parade on Khalid Lagoon, with floating creations and water effects weaving a theatrical spectacle. In 2016, they added the adjoining Palm Oasis as a location, to create a dialogue between nature and technology. In 2017, they upped the interactivity, including an artwork that allowed visitors to manipulate the projections on a 500-metre-long facade by sliding their hands over a DJ-deck-sized control panel in front of the building. That year also introduced the food truck area, a prime social hub. These elements are now mainstays of the festival and are sure to return in some form in 2020.

When it comes to new developments, Al Midfa hints that we should watch the universities. The festival is collaborating with two tertiary institutions, the American University of Sharjah and the University of Sharjah, to bring student-created artworks to their main campus buildings.

It’s no mean feat—staging work on this scale is a huge undertaking. Consider the festival’s hallmark: the colourful projections on building facades. These are made using 3D projection mapping, a technique that allows moving images to wrap around a three-dimensional surface, including elements like doors, windows, columns, cornices and domes, sometimes highlighting the building’s contours and other times making them dissolve into a flat canvas for a completely different kind of image. SLF 2019 artists Filip Roca and Dan Garotte presented their nature-themed work Connections across three facades of the Sharjah Police Academy. Surfaces of this scale require dozens of projectors. Working at such a massive resolution also required powerful multimedia processing software. The rewards were great.

“Our favourite thing was the location itself,” Roca says. “The Police Academy has such a great vibe. There is absolutely no light or sound contamination, it is almost an absolute dark.” Adds Garotte: “The projection was super bright, and the reflective floor added another dimension. It was a truly magical experience.”

Nomada, the European-born, UAE-based company that has been responsible for the artistic direction and production of the festival since its beginning, work on the festival year-round, choosing locations, sifting through proposals from artists and shepherding the artworks to completion. The team at Nomada try to pick artists who represent a broad spectrum in light creation, “from impressive installations to subtle interventions, innovative projections and squares on fire.” They want the festival to be “a travel through time, from primitive flames to the highest-technology light.”

SCTDA chooses a theme each year so that the artworks speak to each other, rather than appearing isolated or without context. Last year was about Family and Culture. The theme for 2020 is yet to be announced.

A couple of weeks before opening, the event takes on a tangible form, as artists fly in to install their artworks and the true heavy lifting begins. One of the consequences of staging a festival for the public, in public spaces, is that the venues are never unoccupied—people work in them, walk in them, dwell in them and commute through them. Conscious of disrupting the life that already exists there, the Nomada production team try to be as discreet as possible in their preparations, to leave nothing behind at the end and to create no disturbance during the day.

SCTDA has also made changes to enhance the festival’s environmental sustainability. Switching off the surrounding lights in festival locations netted a power saving of 50% to 60% in each area. “Once the festival had become established, sustainability has become part of the agenda, all the lights and projectors used have passed certification for environmental compliance,” Al Midfa says.

For all the festival’s scale and grandeur, the organisers and artists also value the small moments. At least one of the attractions of the festival is the people it brings out onto the streets to enjoy the mild winter evenings. Light is the conduit—it gets them talking, playing, creating and collaborating.

“The festival is of great importance culturally for we are making a common language—not an easy task but [one with] extremely worthwhile results,” Al Midfa says. “The community bonding and deep-rooted atmosphere of cultural inclusivity is another unique and important factor. Families gather for the festival, visitors travel to the emirate, strangers meet and talk, and friendships are fostered within the umbrella of the Sharjah Light Festival.”

The Sharjah Municipality building, Al Noor Mosque and other grand sites will always dazzle during the light festival. But the joys aren’t just in looking up—they’re also in looking around.