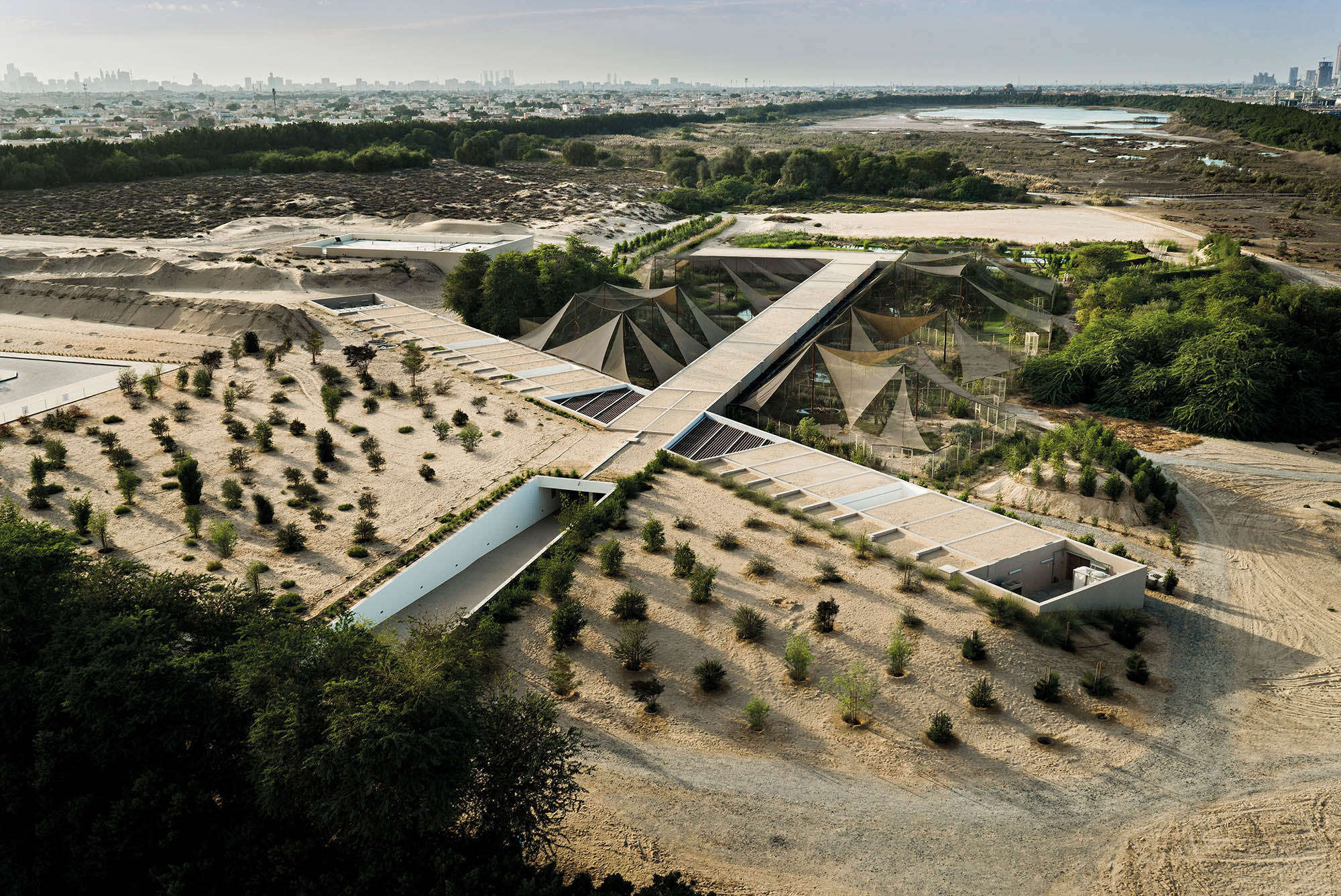 A showcase for environmental restoration

In the middle of a wide expanse of marshy water, a pair of flamingos rest in classic stance on one leg as a flock of black-winged stilts flit around them. A green bee-eater darts through the air with a flash of emerald wings, while a harrier glides lazily overhead.

In this wetland tableau there’s almost no sign of the surrounding metropolis. The only sound is intermittent chirping until a caravan of electric-powered sightseeing buggies makes its way down the reed-lined track around the water, silent but for the giggles of its passengers—dozens of schoolchildren, who jostle for a view.

The story of the wetland is an exemplar of how urban officials can reverse decades of environmental degradation and reclaim their communities’ natural heritage.

Wasit Nature Reserve, declared a protected area in 2007 by Sharjah’s Ruler, His Highness Sheikh Dr. Sultan Bin Mohamed Al Qasimi, and now inscribed on the Ramsar Convention’s list of Wetlands of International Importance, is a tranquil 0.86-square-kilometre oasis on the edge of a city of almost 1.3 million inhabitants.

The reserve’s sand dunes, salt flats, ponds and lake are a haven for some 200 species of wild birds, local and migratory, as well as for butterflies and various species of mammals, reptiles and insects. Eight aviaries attached to the visitor centre provide a sanctuary for 60 bird species, some of them endangered. The centre itself, designed by Dubai-based X Architects, won the prestigious Aga Khan Award for Architecture in 2019 for its innovative design, a first for the UAE.

The Aga Khan jurors noted that the Wasit Wetland Centre “stands out as a remarkable, indeed unique, collaborative project combining architectural excellence with a deep commitment to ecological imperatives.”

“The project’s major contribution to its urban environment is in its reclamation of former wasteland by diverting it from the temptations of real estate development and valorising it as a form of natural capital,” they said, adding that it “sets a powerful precedent that encourages low-impact and environmentally conscious development in a region known for its propensity to go in the opposite direction.”

Before Sharjah grew into the metropolis it is today, the wetland was a tidal lagoon, one of a chain of coastal salt flats and marshes in the region. At one end was a sea inlet; at the other end, an aquifer that carried water from the mountains.

Historically, local residents used the area to graze their livestock. As Sharjah rapidly urbanised in the 1970s and 1980s, the site became a garbage dump, known locally as the Ramtha Tip. Neighbours dreaded the noxious odour that would waft from the site when the winds shifted the wrong way. A road was built, bisecting the former lagoon and cutting off the inner portion from the sea, leading to more pooling of water.

Peter Hellyer, a prominent Abu Dhabi- based historian and environmentalist who helped carry out studies in preparation for the site’s rehabilitation, recalls the site in the 1990s, with “dumped cars and wild dogs running around and things like old refrigerators, bits of rubbish, leaking oil out of cars.”

Even then, the area’s relative seclusion, vegetation, and year-round water made it a favoured watering hole for migrating birds. Ironically, the wastewater dumped at the site helped to attract more wildlife.

“Even if the piles of rubbish would sometimes be on fire and sort of smoking away, in between them, in pools of water, you’d get all sorts of birds coming in,” Hellyer recalls.

As of the year 2000, Hellyer says, some 200 bird species had been spotted at the site, including some which had never previously been recorded in the UAE; for instance, it was the first recorded breeding site of the white-tailed plover in the Emirates.

By that time, the municipality was no longer dumping waste in the wetland, but the area remained heavily contaminated. The site would have been far from ideal for the development of housing or commercial buildings, so officials took another tack.

The first step was to conduct environmental studies, beginning in 2005. The Cape Town-based landscape consultancy Gary Bartsch International worked with Hellyer and his team to study the site’s flora, fauna and archaeology.

Then remediation began. About 40,000 square metres of rubbish was hauled out. The site was fenced off to prevent further dumping, with a hedge of damas trees planted around its border. Invasive species like mesquite were removed and some 36,000 trees were planted, including yellow-barked acacia trees, which are attractive to migrating African herons.

Power lines were removed and islands built in the middle of the lake to give birds a safe nesting place. Reeds naturally filtered and purified the contaminated water, says Aisha Al Midfa, the reserve’s director.

As important as restoring the site’s natural environment, Al Midfa says, was establishing a complementary built environment that would allow the site to fulfil an educational mission along with its preservation mandate.

“His Highness decided that we cannot keep all this information for ourselves, it’s better for the people outside to know about [the site], so that’s why the centre was built, to be not only a tourism site but also an educational site,” she explains.

In 2012, Sharjah’s Environment and Protected Areas Authority commissioned X Architects, a firm founded in 2003 by a pair of graduates from the American University of Sharjah’s architecture school, to design the visitor centre and surrounding complex of aviaries.

The $7.6 million (AED 28 million) centre opened in 2015, welcoming school groups of all ages, researchers, bird watchers and families. Visitors can walk the path around the water or take a guided buggy tour. Six bird hides, constructed from recycled wood and plastic and fitted out with binoculars and information boards, are dispersed around the lake to give birdwatchers a better vantage point.

Inside the centre, the gallery hall offers views of the aviaries, each representing a different iteration of the wetland environment. Windows along one side of the gallery also provide a view into the incubation room and food preparation area.

On a recent morning, birds gather as workers dispense trays of food. In one aviary, a curious Arabian helmeted guineafowl approaches the window and pecks at the glass. A northern bald ibis—a critically endangered species, although its numbers are now on the upturn—perches in the shade on top of a rock wall. At the far end of the hall is a view of the lagoon populated by flamingos, herons and whistling ducks.

Each bird in the aviary has its own “passport” documenting its history and information on food, medication and other points of care. The birds get daily medical checkups, Al Midfa says, and the centre takes special precautions to make sure they are not exposed to diseases. There are even separate landscape staffs for outside and inside the aviaries to avoid cross-contamination.

While most visitors come from the local community, the number coming from abroad has increased, particularly since the centre received the Aga Khan award. Al Midfa says government officials from the region and beyond have come with an eye to carrying out similar projects in their own jurisdictions, including a recent delegation from China.

“We have visitors from all around the world coming here,” she says. “The training centre is like a bridge between these people and what’s going on in the reserve.”

The design of the centre, Al Midfa says, was “connected with…the vision of His Highness.” The design is also visionary for how it makes the centre recede from view. The building appears to sink into the ground, with visitors entering via ramps.

“The first thing was that migrating birds shouldn’t see any interrupting buildings in their way, so that’s why the building is underground,” Al Midfa says.

The centre “merges into the natural environment in ways that respect the site’s integrity—a wonderful way of reminding us that architectural merit resides more and more on a structure’s capacity to blend into an environment rather than challenge it,” the Aga Khan jurors noted.

“We had the birds, somehow, as our clients,” Esmaeil recalls. “We had to design being sensitive to them, and they’re very sensitive generally to built environments.That’s why we tried, as much as possible, to camouflage the architecture with the nature, this idea of creating almost zero architecture.”

In addition to the migrating and local birds living in the wetland, other winged Wasit residents inhabit the aviaries. Enclosed only by netting, the aviaries give a sense of openness to the birds inside and appear as part of the natural landscape to those outside.

“The nets have different quality, different density, the type of trees being used in every [enclosure] is different, based on the type of birds,” Esmaeil says. “Some birds need to have a certain orientation to have shade all the time, so the architecture is responding to that.”

For that reason, he notes, the gallery is built at a diagonal tilted towards the north. Even the angle of the glass in the windows looking out on the aviaries has to optimise the reflection so that birds would be disturbed as little as possible by the movements of visitors, while also making the glass appear as a solid object so that they would not fly into it.

For Esmaeil, the project is personal: when he was a student at AUS in the late 1990s and early 2000s, he lived just half a kilometre from what is now the Wasit Nature Reserve and remembers it from its days as a noxious garbage dump.

“I’m really happy to see that transformation happen, because I’ve lived it in both extremes,” he says.

The Aga Khan award is a vindication for the vision that created Wasit, he says, and ideally an inspiration for future projects.

“I think it’s very important, and I hope it sends a message about how to work with the natural environment, how to preserve and how to conserve it while developing, so that the development becomes part of nature,” he says. “We hope this will inspire the younger generation of architects… as a philosophy of how to look at development in this region.”