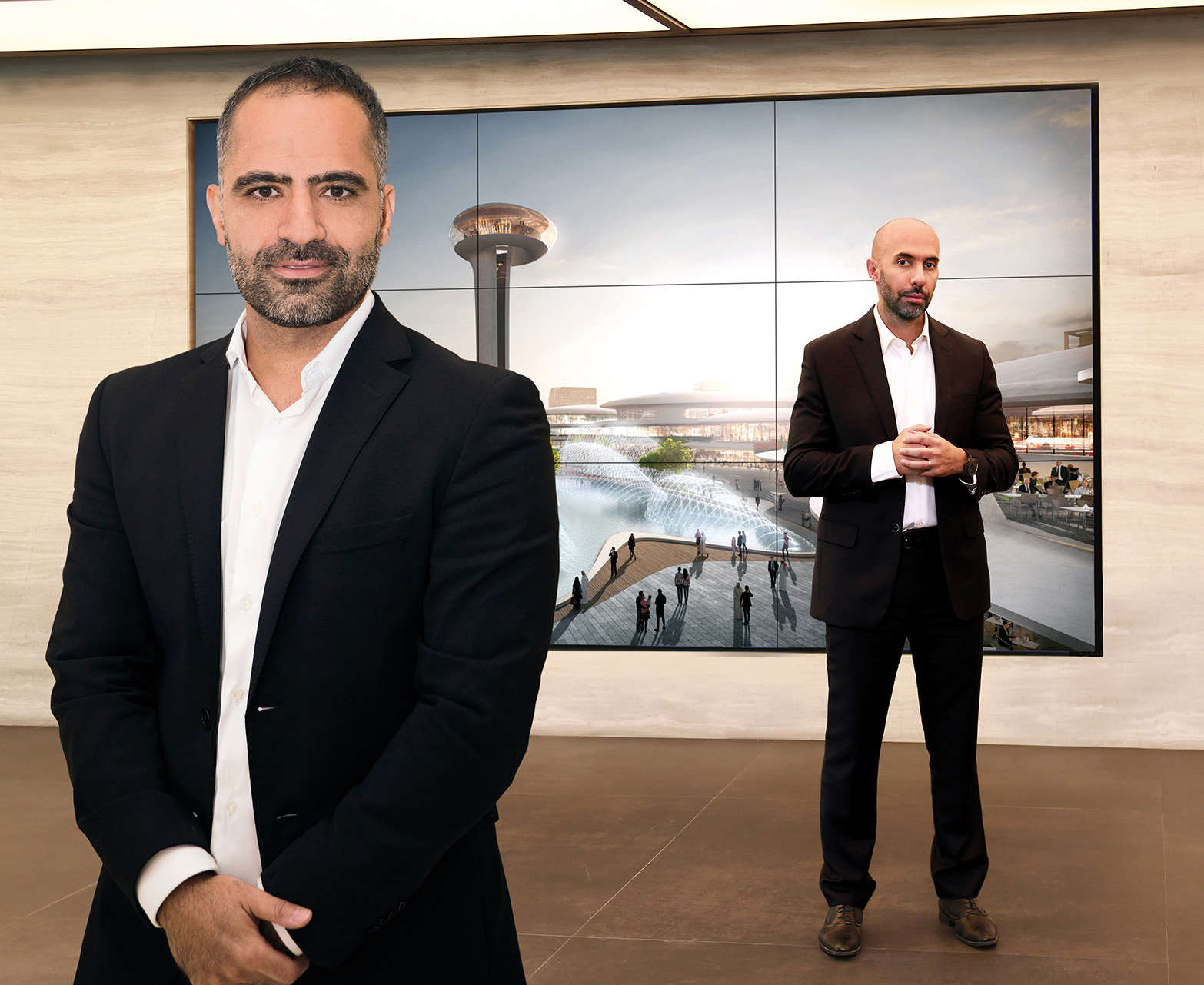 WHERE THE LIVING IS EASY

In the heart of Sharjah, Aljada is the biggest residential project in the emirate’s history. It promises not only affordable homes, but a new lifestyle.

Four years ago, two friends sat together in a small coffee shop in the UAE and began to talk about the Sharjah real estate market. But these were no ordinary friends and it was no ordinary conversation. The men in question were Sheikh Sultan Bin Ahmed Al Qasimi and Prince Khaled Bin Alwaleed Bin Talal, and their get-together ended with the creation of a real estate company and plans for the largest residential project in the emirate’s history.

“The main thing that struck them was the lack of integrated communities in Sharjah,” says Ahmed Alkhoshaibi, the Australian-Lebanese CEO of Arada, the developer born of that coffee shop meeting. Sharjah lacks the kind of project that combines well-designed, affordable homes with local facilities. “It sounds very simple, but that idea is actually what Arada is all about: great design and great amenities, all at a great price.”

Almost three years on from Arada’s creation, Alkhoshaibi’s words are finding physical form in Aljada, an ambitious mixed-use development, originally the brainchild of the late Sheikh Khalid Bin Sultan Al Qasimi. By the CEO’s estimation, the project, which was launched in September 2017, could take around a decade to complete.

With a total sales value of AED 24 billion, investment in Aljada is almost as impressive as the 24-million-square-metre footprint it will occupy in Sharjah’s Muwaileh district. Prime land in the emirate is like gold dust, and Aljada has secured the remaining precious grains. “It is
located on the last large piece of undeveloped land in the heart of the city,” says Alkhoshaibi, adding that the location enjoys great connectivity to the rest of Sharjah and the surrounding emirates.

“We are going to give people a reason to stay in Aljada, rather than feeling like they have to get in the car and commute elsewhere.”

More appealing than Aljada’s proximity to infrastructure beyond its borders, however, is what’s unfolding on the inside. That is, the creation of a city within the city. The development ultimately will boast around 20,000 units, with residences ranging from luxury villas priced at more than AED 1 million to studios starting at AED 279,000. The first homes are scheduled for hand-over early this year.

The developers have factored almost every element of everyday life into the blueprint. The residential mix will be serviced by schools, shops, health clinics and a business park, along with 250,000 square metres of green, open space. Aljada’s “crown jewel,” according to Alkhoshaibi, is the Central Hub, a leisure and entertainment complex designed by Zaha Hadid Architects with family attractions, restaurants and retail outlets spread across an area larger than London’s Green Park.

Although the award-winning Iraqi-British architect passed away in 2016, her studio continues to deliver the geometric shapes and fluid, futuristic structures that defined her work. The striking design of the Central Hub seeks to mimic a drop of water landing on the desert sand. It includes multiple fountains and a cluster of droplet-shaped structures that appear to be splashing up from the ground when viewed from above.

With a community feel and comparatively low living costs, Sharjah already serves as a commuter city for Dubai, but as many drivers will attest, the journey between the two can be long and tedious. Won’t a development as big as Aljada exacerbate the burden on the emirate’s roads? “We actually think Aljada is going to have the reverse effect,” Alkhoshaibi asserts. “We are going to give people a reason to stay in Aljada, rather than feeling like they have to get in the car and commute elsewhere.”

Enticing people to remain in Sharjah will be an important task for Arada, not least because Dubai is starting to compete on cost. “As new, affordable residential real estate has become available in Dubai, there has been some movement in expats relocating from Sharjah,” explains Taimur Khan, associate partner at Knight Frank. New landmark developments in Sharjah may help drive investment into the emirate’s residential market. “These masterplan developments offer a more mixed-use product style, where residents have access to similar amenities as those found in Dubai and at lower price points on average,” Khan says.

Arada has sold 70% of the units it has released in the first three phases of the project, with Emirati buyers accounting for around 70% of the almost 4,000 units sold. Saudi buyers are next, followed by investors from other Gulf states and the wider MENA region, as well as India, Pakistan and even Canada. 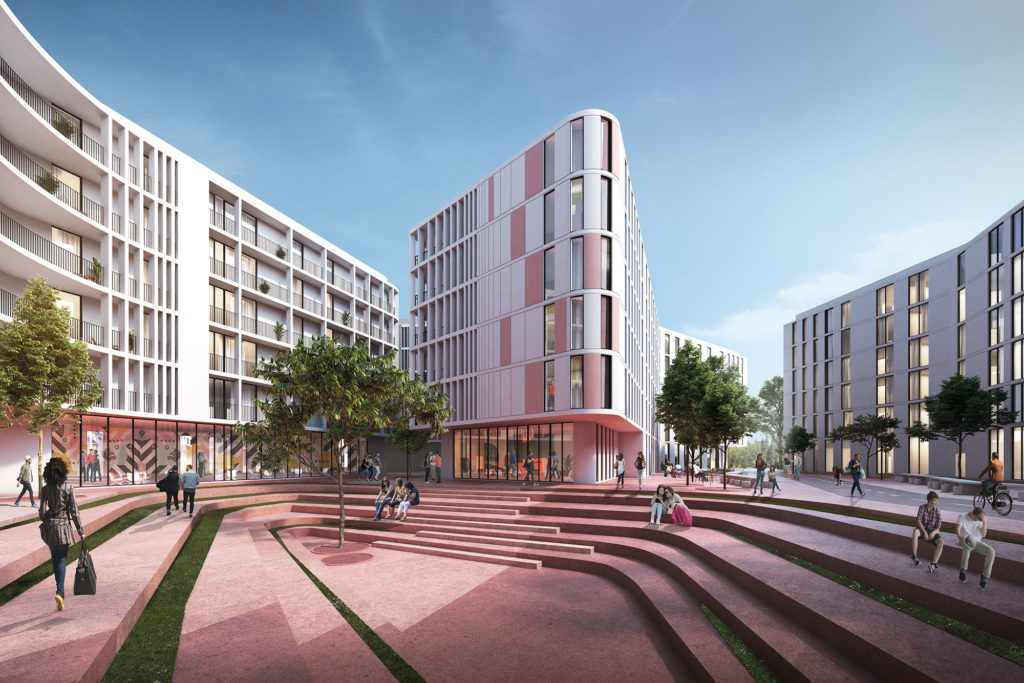 The investor mix is as diverse as the anticipated resident demographic. The developers have focused on co-living concepts, modern designs and student housing to reflect Sharjah’s youthful population, while also staying true to the emirate’s traditions and heritage that appeal to local families and expats in search of authenticity.

In fact, Sharjah’s history and urban environment have informed Aljada’s design. “Many of the houses in [the neighbourhood of] Al Khan were built about 200 years ago,” says Elie Mrad, Arada’s head of architecture and design. Al Khan was grouped around communal squares, with main alleyways known as sikkas serving as shaded wind tunnels that offered residents welcome respite from the baking heat. “Many of our buildings follow the same principles,” Mrad says, adding that the mission is to deliver architecture that is both tied to the geographical and cultural context of Sharjah, and rooted in modern tradition.

Aljada is looking to the future, too. It will implement next-generation 5G digital infrastructure and will deploy cutting-edge technology in areas such as mobility, utilities and waste management. Arada intends for Aljada to become a testbed for new ideas. One concept on the table is a “sustainable lane” that could one day accommodate autonomous vehicles.

“I can’t sit here and say that Aljada will be a completely sustainable, zero-carbon project,” Mrad says, “but we certainly see sustainability as a benchmark…which is why we are working to develop this ethos in every aspect of what we do.” At Aljada, that ranges from renewable energy to sustainable building materials. This isn’t “greenwashing,” he says, but what customers want.

According to Raj Chinai, managing director at US-based investment and advisory firm LCR Capital Partners, the current investment climate calls for caution. “Given the current market uncertainties, investors should evaluate all parameters of any real estate investment opportunity with a higher degree of scrutiny,” he says. “Investors who are able to conduct a thorough due diligence on the developer’s track record are more likely to arrive at the right decision on the timing of their investment, while also identifying which project is the optimal one to invest in.”#B7B0B0

Arada intends for Aljada to become a testbed for new ideas. One concept on the table is a “sustainable lane” that could one day accommodate autonomous vehicles.

Chinai points to the positive characteristics of the wider UAE market. “On a relative scale, the UAE’s world-class quality, superior infrastructure and on-time delivery are highly attractive factors for any real estate investor, whether from the GCC or globally,” he says. “Keeping this in mind, Aljada will benefit from these core fundamentals.”

Alkhoshaibi acknowledges the challenges. “I would be lying if I were to tell you that the property market in the UAE is in fantastic shape,” he says, pointing to regional instability, the effect of low oil prices, depressed consumer sentiment and a challenging supply-and-demand scenario. But not all markets are equal, and in his view Sharjah is a “hidden gem.”

In July, the Sharjah Real Estate Registration Department announced that AED 14.7 billion had been invested in local property in the first half of 2019, some 65% of the total value of transactions in 2018, setting sales on track for strong growth for the year. While the market has not experienced the volatility seen in Dubai, it is also a less mature market, cautions Khan of Knight Frank.

The fact that Sharjah only opened its real estate market to foreign ownership in 2014 and a lack of projects available for purchase mean that sales prices have outperformed the wider UAE in relative terms, he says. Citing data from REIDIN, a real estate data analyst, he points out that apartment prices fell by 7.3% from their peak in October 2018 to September 2019, while apartment rents dropped 32% from their height in June 2014 to September this year. The price drops spell good news for renters and prospective owner-occupiers, but less so for developers and investors looking to maximise profit.

Unfazed, Alkhoshaibi reels off reasons for his confidence in the project: a 30% increase in sales for Arada in the year to August; the AED 1 billion in financing it has secured from Mashreq Bank, and the continued support from Sharjah’s rulers and key government departments.

In March 2017, Arada launched a different project, Nasma Residences, whose first phase sold out in less than a month. That success pushed plans for Aljada forward. “Once it was clear that our hunch about demand for this kind of community in Sharjah was justified, it made sense to move forward with this much larger and more ambitious project,” explains Alkhoshaibi.

Arada has its sights on new projects in new locations: first stop, Saudi Arabia. Details remain under wraps, but Alkhoshaibi drops a hint: “What I can tell you now is that it will be at least the size of Aljada, from a geographical perspective.”