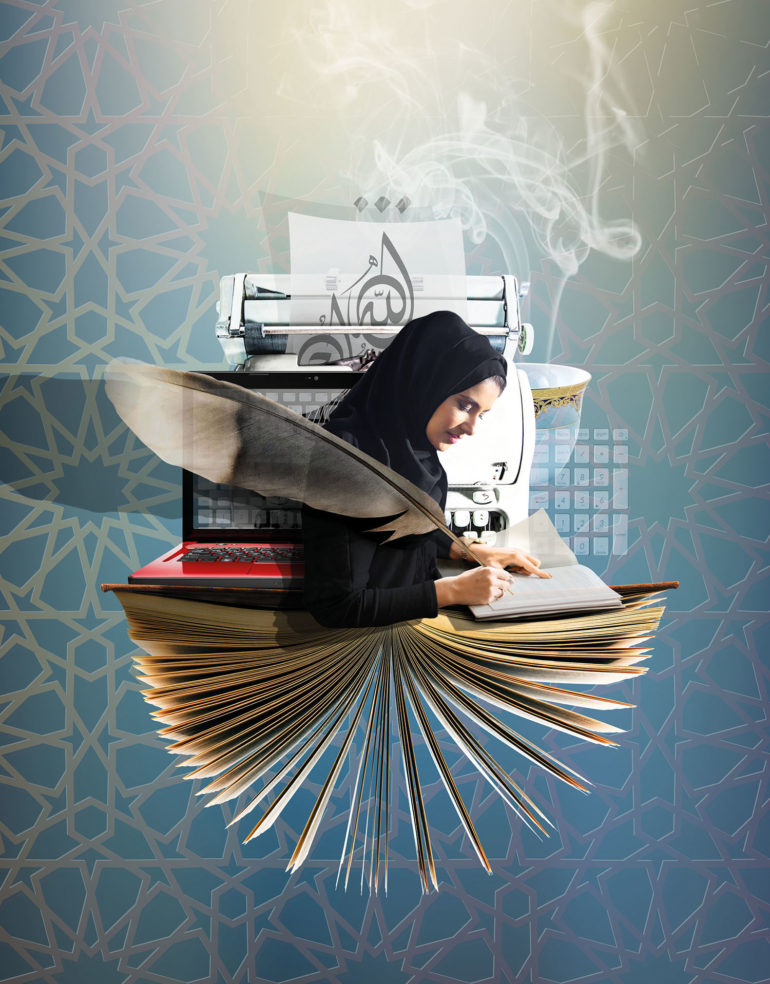 Support for writers is blossoming in the UAE. Iman Ben Chaibah and Fatma Al Bannai have been empowering Emirati writers and helping share their work with the world. Is this a Golden Age for writers in the country?

On a warm October afternoon, armed with pens and notebooks, a dozen aspiring writers sat on wooden chairs around a U-shaped table in Dubai’s Al Safa Art & Design Library. Dressed in a white embellished abaya and maroon scarf, Emirati romance writer and poet Shahd Thani stood in front of a flipboard and explained to the women how they could bring their books to life.

The workshop is held by Untitled Chapters, an independent and women-only writers’ group which boasts more than 60 members, with book-club events and workshops held in Dubai, Sharjah and Abu Dhabi. Since it was founded in 2011, Untitled Chapters has played a role in shedding light on the work of Emirati writers, especially women. Founder Fatma Al Bannai—alongside board members and Emirati writers and poets Afra Atiq, Hessa Al Banafsaj, Shahd Thani and Shamma Al Bataki—not only encourages reading works by Emirati writers, but has created a close-knit community that supports budding female writers in the UAE.

Thirty-year-old Al Bannai has been writing since she was in elementary school. She took a number of writing classes over the years, but was always looking for fellow writers that she could share her work with. After meeting Thani online, who is known for her romance blog novel Yet Another Emirati Kinda Love Story, she was introduced to other writers. A month later, Untitled Chapters was born and the first meet-up was held. Writing is often a solitary experience, she explains, and one of the main objectives of Untitled Chapters is to bring writers together so they can learn from each other and grow in the process.

“The reason we established Untitled Chapters as a female-only group is because we wanted the parents of writers who are 11 or 12 years old to be comfortable,” says Al Bannai. “Writing is a very intimate process, with a women-only group we could be more ourselves.”

Untitled Chapters is part of a blossoming of the UAE publishing industry over the past decade, which saw 15,789 new Emirati titles published by over 100 local publishing houses, according to the Emirates Publishers Association, which itself has grown to 138 members from 13 when it was founded in 2009. On the international level, Sheikha Bodour Al Qasimi, president of the EPA, was appointed vice president of the International Publishers Association, the first Arab woman to hold the post.

Social media platforms and online magazines shine a light on Emirati voices and connect Emirati writers with readers from around the world. Last year, Sharjah organised the first Emirati Book Fair to promote the work of local publishing houses and talents. The event, which was held on May 27 and coincided with Emirati Writer’s Day, saw the participation of 22 local publishing houses.

But the cherry on top of a productive decade was when Sharjah became the first city in the Arab Gulf to be named World Book Capital by UNESCO last year. It was a tribute to the city’s efforts in promoting its love for the written word.

Untitled Chapters is an intimate hub that encourages writers to find their unique voice and provides support to members through monthly meetings and events. At the meet-ups, held in cafés and libraries, writers share their work and feedback is encouraged. The group also offers workshops on how to write with love, and organises writing marathons and book clubs. The group is self-funded, not sponsored, and Al Bannai would like to keep it that way. In addition to fiction and poetry, fantasy fiction is gaining traction, a genre not previously popular among Emiratis.

Members are encouraged to explore different genres, and write in the language they feel most comfortable with. “I’ve had people ask me, ‘Aren’t you Emirati? Why aren’t you writing in Arabic?’ I always say that my mother language is Arabic and I’m so proud of it, it’s part of my identity, but English is the language where my creativity flows,” says Al Bannai, who is working on publishing her historical romance novel with an international publisher.

A growing number of Emirati writers, especially women, choose to write in English. This is evident in Sail magazine, which was founded in 2010 by Iman Ben Chaibah, vice president of the Emirates Publishers Association. The publication has become the go-to online resource for Emirati writers.

“Around 80% of our writers at Sail magazine are women,” says Ben Chaibah, who believes there should be a chapter under the Emirates Writers Union for Emiratis who write in English. “At the end of the day, [those] are the ones who cater to international readers. We have the responsibility to create a platform for our youth who write in English.” Today, some of the content in Sail magazine is translated and printed in Italian and German magazines, exposing the works of Emirati writers to a wider audience.

Ben Chaibah also believes that the media could do more to promote the work of Emirati writers and foster a reading culture. “We need to cover bestsellers here in the UAE instead of covering international bestsellers. Readers’ tastes in the UAE differ to international ones.”

“Support should also start from the school level,” says Al Bannai. “There should be a creative writing class dedicated to kindergarten students, even if it takes place once a week.” At a workshop Al Bannai organised for kindergarten students, she was positively surprised by the raw creativity, especially the stories they came up with when presented with a prompt. The creative talent is there, she says, but it needs to be nurtured. This is where Untitled Chapters’ support for pre-teen members is important and could change the game for young writers in the country.

Ben Chaibah’s passion for writing and support of writers have led her to expand from the e-magazine to launch Sail Publishing, an ambitious publishing house specialised in digital and print books.

Despite the great efforts publishers have been making in the UAE, there is still room for improvement, the two women say. Al Bannai says that we live in an era where exposure is huge for Emirati writers, with a lot of them getting published because of it. But “improvements could be made with regards to distribution, to help expose books from the country to the wider region and the rest of the world,” she says.

Still, there is no better time to be a writer in the UAE than the present. With so much support from government and private entity levels, we wonder whether we are living in the Golden Age of the Emirati writer.

“I think we are at the pre–Golden Age stage,” says Ben Chaibah. “Maybe in a couple of years we will be there, as people elevate their writing styles and write because they really have something to say.”

Until then, Al Bannai and Ben Chaibah will continue to offer their support to writers in the country, with a busy schedule planned for 2020.