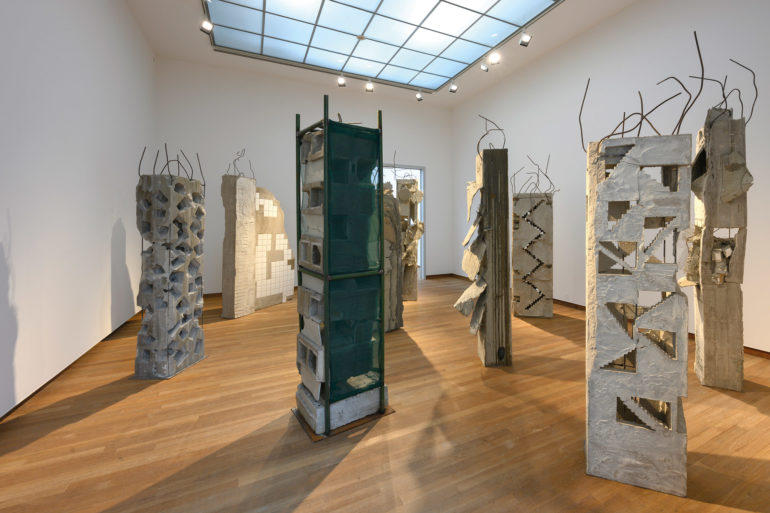 Originally displayed at the Bonnefantenmuseum in Maastricht, Slanted Squares by Marwan Rechmaoui is the result of winning the Bonnefanten Award for Contemporary Art 2019. The jury included Hoor Al Qasimi, President and Director of the Sharjah Art Foundation, hence the show’s next stop, the Al Mureijah Art Spaces. Curated by Zeynep Öz, the solo exhibition uses industrial materials as well as the cold and clinical lines and forms of an urban environment to relay the story of a much more pressing subject: bloodshed, war and loss.

The exhibition includes a SAF commission centred on the artist’s interest in cartography as well as the ongoing series Buildings (2000–present), referencing buildings in Lebanon that exist in a state of suspension. Part of this series, Monument for the Living (2002) is a replica of Al Murr Tower, an abandoned high rise in Beirut which was built in 1974 but never finished. Instead, it was used as a sniper post during the civil war. Also on show is Pillars (2014–present) that simultaneously explores crumbling architecture and social morals. Rechmaoui started working on this series at the beginning of the Syrian war, when images of the conflict provoked feelings similar to those he had experienced about Beirut 20 years earlier. —AS