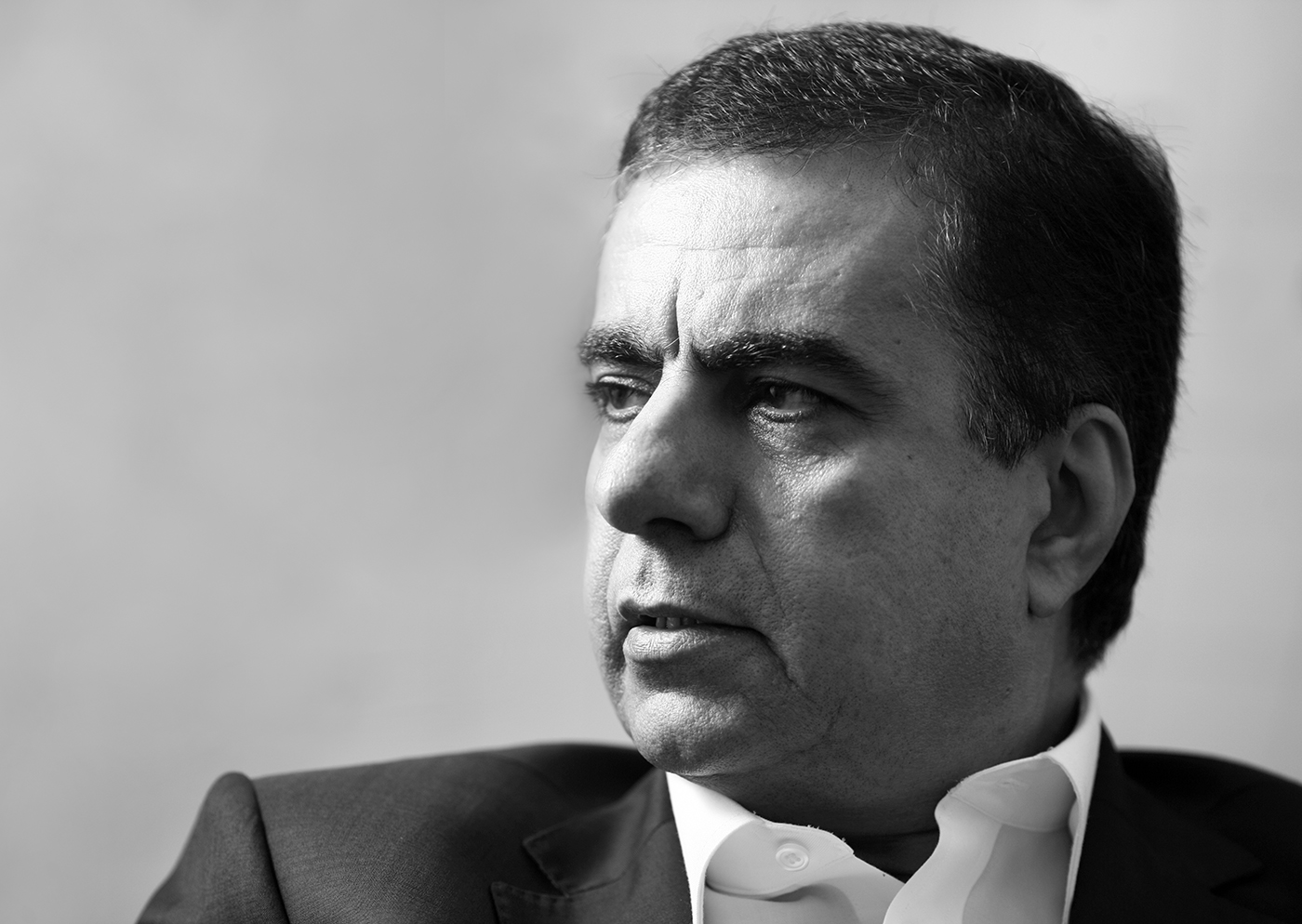 The success of Air Arabia was not a foregone conclusion. So how has its charismatic CEO bucked a trend that has seen industry-wide turbulence?

On the day I meet Adel Ali, CEO of Air Arabia, it’s a calm and sunny day in Sharjah, but the evening before had been chaotic. A thunderstorm had rolled through, causing planes to divert and throwing operations into disarray. “We are in a challenging industry, whatever we say,” Ali says with a laugh, sitting in his office at the airline’s headquarters just opposite Sharjah International Airport. “There’s always something happening.”

That goes well beyond thunderstorms. Oil prices, trade disputes, currency fluctuations, and so on—not to mention the political turbulence seen in the Middle East in recent years. “One has to be realistic that there is always going to be three good things happening and one bad thing crops up somewhere,” Ali says. “But we just manage and live with that. We’ve seen it all throughout the years in this region—it’s a resilient region. It manages and moves on.”

It’s all part of the thrill of running an airline, he continues. “I have to be excited with what I do—otherwise it gets boring and we won’t succeed!”

Ali has reason to be upbeat. He founded Air Arabia in 2003 and it has come a long way since— growing steadily and managing to turn a profit nearly every year, something almost unheard of for a start-up carrier. In the fourth quarter of 2018, Air Arabia posted net profit of AED26 million ($7.08m) and carried 2.1 million passengers, a 5% increase over the same period in 2017. The airline has 53 planes serving 155 destinations, and bases in Ras Al Khaimah, Morocco and Egypt in addition to its original hub in Sharjah.

Ali is a Bahraini who earned his chops in the airline business with British Airways, where he took care of Concorde customers and later worked in various parts of the company, from operations to commercial. It was a return to Bahrain and a stint at Gulf Air that got him seriously thinking about the need for a low-cost airline in the Gulf region. Many, including Gulf Air management, thought the idea was a silly one.

“In this part of the world it was to most people a new thing,” says Ali. “And aviation people thought the business model would not work in the Middle East.”

Of course to set up a new airline you need to start with an airport to base it in. Many in the Gulf were already dominated by large and growing home carriers. Except one: Sharjah. “When we came and met Sharjah airport authorities, it turns out they were also thinking of setting up an airline,” Ali says. “So the two needs matched.”

Together they did extensive research and found there was great demand for more affordable travel to, from, and within the region. Still, there were plenty of detractors. “It was perceived that the airline would last for a very short while and it would go away,” says Ali. “And maybe that was one of the good things, that people had said that. Because it gives you the encouragement to make sure that you don’t fail.”

When I visited, the airline was expecting a new addition to the fleet in the coming weeks, and staff were rightly excited. The first of six Airbus 321 long-range jets would soon touch down at Sharjah International, with an announcement on the way about the carrier’s first Southeast Asian destination —Kuala Lumpur. It promises to be the first of many new destinations that are farther afield, made possible by the new jets’ range of up to 4,000 nautical miles. As an upgraded version of the A320s that Air Arabia already flies, the A321LR is a perfect addition, keeping a common, simplified fleet while allowing the carrier to stretch its reach.

Early on, Ali says it was a challenge to educate people about what the term “low-cost carrier” actually means. “That’s not necessarily the best name to have,” he says. “Low cost is managing the costs internally by ensuring that you have got the best productivity in the business. You don’t waste resources. Well, [many people] assumed that low cost would have meant very old airplanes and pretty bad service, to the extent that some used to call us and say, ‘do we get insured if we fly on your airline?’”

Ali chuckles at the thought of that, adding, “The extreme one was: ‘do you guys have seats on the airplane or do we stand?’”

All evidence indicates that they’ve been successful in bringing people round to the idea. The likes of Emirates, Etihad and Qatar Airways have snapped up expensive fleets of big planes and looked to span the entire globe. Their rise has been impressive, to be sure, and they’ve won many customers. Air Arabia’s growth has been strong but also measured—taking a conservative, precision approach and identifying opportunities. At the same time it has managed to connect a huge area, all while keeping the fleet and operation simple and costs low. Part of that is down to its multi-hub approach, and its decision to fly the flag for the whole region, starting with its name.

“We’re lucky in that we created a brand called Air Arabia,” says Ali. “Now the Arab world has about 300-plus million people, and from one end to the other is about 10 hours flying. The brand name helps us to be anywhere in the Arab world and linking the Arab world within, as well as linking it—as we’ve done very well—from Morocco to Europe, from the UAE to the Subcontinent and the East, from Egypt to the Middle East and Africa.”

The Arab world is still ripe with opportunity, according to Ali, with a number of areas where aviation has not fully matured, and others that he thinks will soon open up again after periods of conflict and unrest, such as Syria and Yemen.

There is opportunity beyond the region as well. Venturing farther into Asia is on the agenda. Secondary cities in Europe offer promise, too, as seen in recent additions such as Prague. When I ask about new services in the works, Ali is circumspect—except to say that the airline remains ambitious. “We believe that we should be linking any two airports in the Arab world at the least,” he says. Additionally, the airline plans to order between 100 and 120 aircraft this year. And he says that with the aircraft technology available now, Air Arabia doesn’t need to order bigger aircraft in order to reach the places it wants.

“It would not be right for us to think about wide-body planes because they come with their own complexity,” Ali says. “This business model has worked for us for 15 years, and it’s still working. I’m a conservative by nature, and I see there is no reason just to have big airplanes. They all fly and get you there, and they all nowadays offer almost the same comfort level.”

Critical is the beneficial location of Sharjah, he tells me—right in the middle of everything. With its position so close to Dubai, it’s tempting to think it might suffer from the massive number of flights just down the road, but Ali doesn’t see it that way.

“Sharjah Airport offers a fantastic catchment area. Dubai is a big market [for us] as well,” Ali says. “What we offer the customer, a big airline cannot offer. We offer speed. Shorter check-in times, smaller airports—the total experience door to door becomes much shorter because of our business model. If you’re a frequent traveller, that’s what you want.”

An airline is a natural tool for exporting and publicising a regional or national brand, and local government can take steps to help the home airline do the same. So I wondered: how have Air Arabia and Sharjah worked together in that respect—especially when the airline’s name evokes a whole region?

“Air Arabia is Sharjah, Sharjah is Air Arabia,” says Ali. “And I think the two have worked hand in hand a lot in the past 15 years. We’ve been a good ambassador. Air Arabia is known, associated with where it started, in Sharjah. Your tail gets recognised at airports, people say where’s this from?”

As part of their partnership, the airline also relies on authorities to keep up when it comes to infrastructure. Though the manageable size of Sharjah International is one of its selling points, it is already over capacity, with 12 million people using facilities built for eight. Luckily expansion is under way, with a plan to bring capacity to 20 million passengers a year by 2027. That will still keep the airport a manageable size, but make room for Air Arabia to grow.

All of this speaks to the success of Air Arabia’s business model. And many may be wondering what the secret is, when so many airlines struggle to reach profitability and grow sustainably. On this point, Ali offers some useful advice.

“All airlines should think business first, airline second. There’s quite a lot of airlines around the world, and the region, that think it’s the airline, then the business comes,” he says. “That formula needs to be reversed, because without a good business the airline suffers. It’s not rocket science having an airline.”

He points to the three basic components you need to get right, whatever the business. Keep the customer happy (they come first); make sure your employees are satisfied and convinced that what they’re doing is worthwhile; and keep shareholders happy by using those first two to deliver the right results.

I ask Ali what has been the best thing about the Air Arabia project so far. He says that it feels good to have started an airline from scratch and seen it grow into a thriving carrier. But the success of Air Arabia was never a foregone conclusion, and he is rightly proud of what he has been able to make of it.

“I had an aspiration to put an airline together, and I did,” says Ali. “For most people, you join an airline and you find that it existed much before you joined, and you leave an airline and it continues. You just jump on a train and get out somewhere. It’s a good feeling to be one of those people who actually started an airline, and started this journey.”