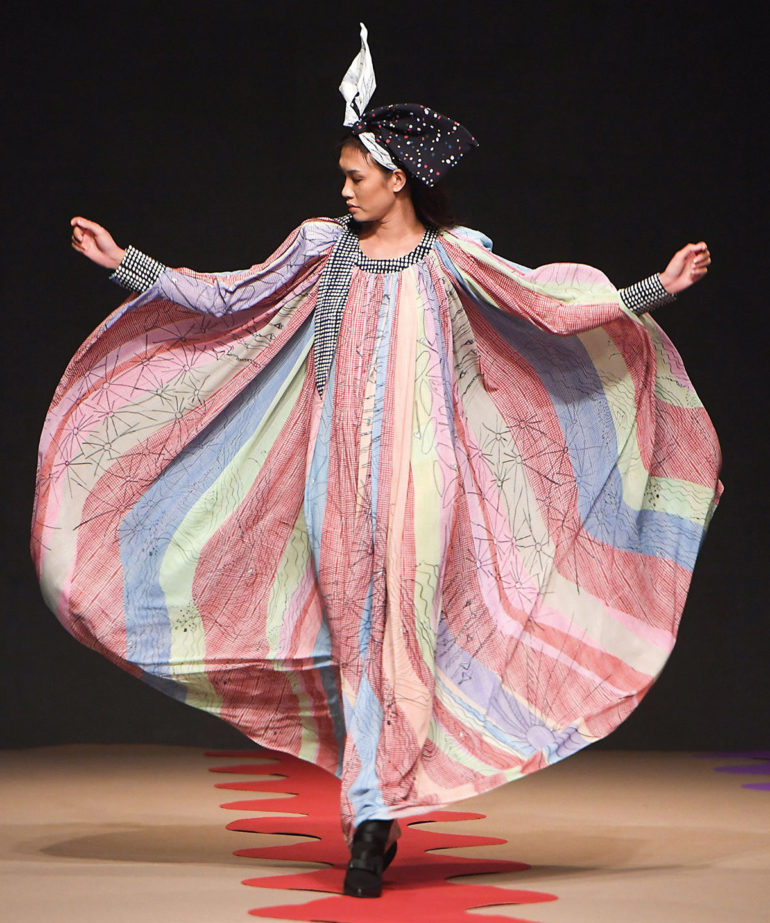 Riding the crest of a wave

Adventurous and passionate, warm and edgy, Reema  Al Banna is one of the region’s freshest design talents. Her label, Reemami, reflects her reach-for-the-stars mantra.

Within minutes of meeting her, you feel like you’ve known Palestinian designer Reema Al Banna your whole life. Positive and warm, she loves exploring new hobbies such as boxing, mountain climbing and wakesurfing. If we could sum her up with one word, it would be “fun.”

Al Banna’s brand is known for its colourful prints, architectural cuts and volumes, and social messages. She does not follow trends, but instead is inspired by what’s going on around her, especially her love for sports. Her Fall 2019 wakesurfing collection was inspired by her latest hobby—a water sport where a rider trails behind a speedboat riding the boat’s wake. Traditional prints are mixed with whimsical surf-related prints, water-colour paintings and hand-sketched illustrations, all created by the designer in-house, on Al Banna’s signature architectural silhouettes and cuts.

“Every collection has a story that’s very close to my heart,” she explains. “The reason I chose sport as inspiration for my collections was because I’d like to keep inspiring women and sending a message to stay active, and do what you want, and achieve what you want. Reach for the stars and go for it.” 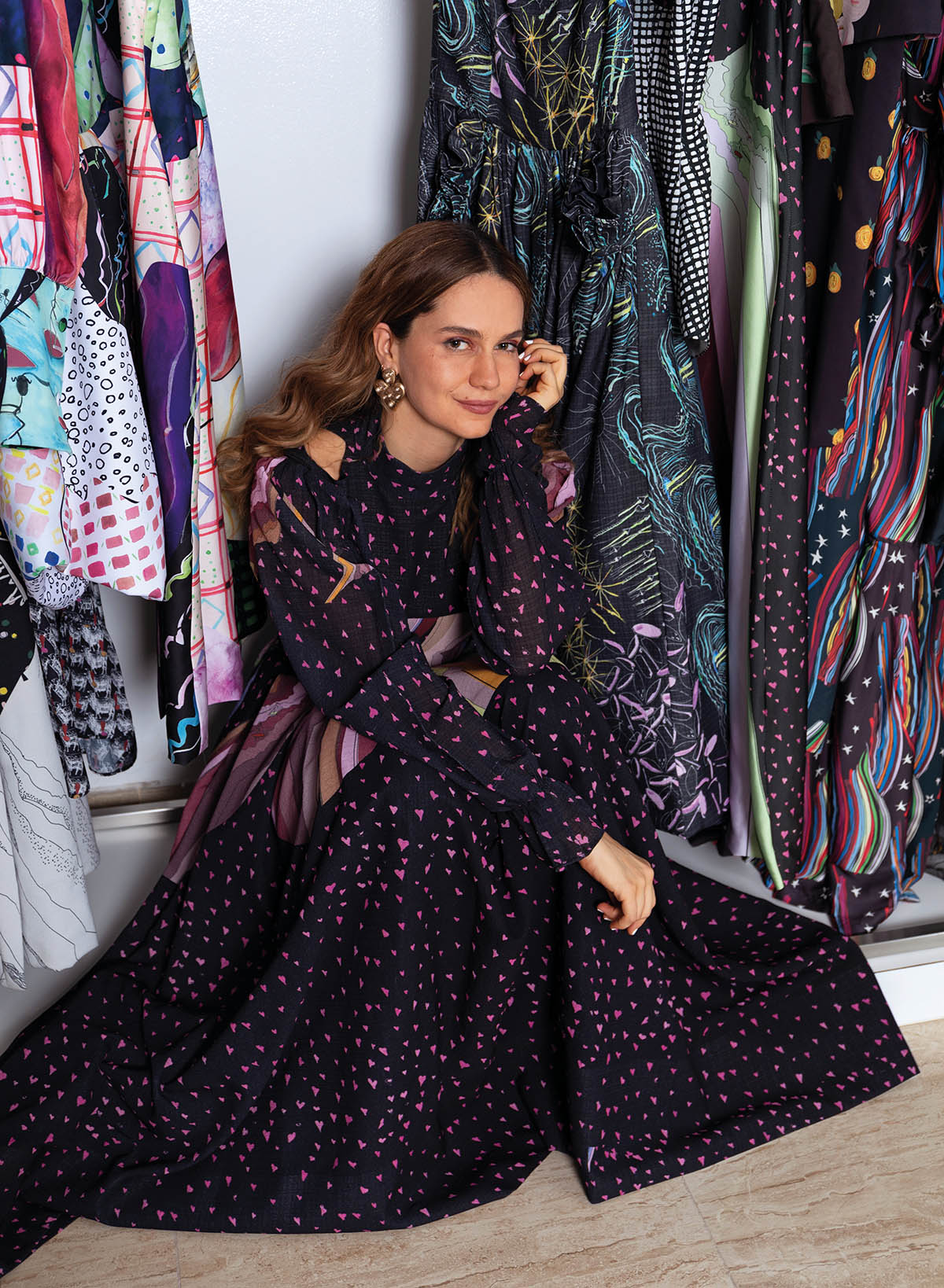 Al Banna herself embodies the “reach for the stars” message. After graduating from the American University of Sharjah, the 33-year-old worked as a graphic designer but felt constrained. Continuing to work during the day, she pursued fashion studies at night at Dubai-based French fashion school Esmod. She launched her ready-to-wear fashion label, Reemami, in 2009 after entering a dress design competition by local fashion boutique Sauce. She eventually quit her day job to pursue her passion.

Al Banna’s proudest moment, and her career’s turning point, was when she received the DDFC/Vogue Fashion Prize in 2016 for her climbing collection, inspired by her love for a sport that pushes her limits. It was evident across the combination of towering mountain and big sky illustrations and experimental cuts. “We had to present our work to the judges, and I left the room feeling I wanted to quit; but then winning the prize in the same night was a turning point and it made all the hard work worthwhile.”

Though Dubai has established itself as the region’s fashion hub, Al Banna prefers the neighbouring emirate of Sharjah. It is, after all, where she has lived her whole life, where her brand was launched, and where it is produced. “I have opportunities to move to Dubai, but my office is here and the factories I work with are very close,” she says. “It’s home.”

“I started everything here in Sharjah and I’m still Sharjah based,” she says. “It helped me so much because there are a lot of resources for a young designer to start here. In the beginning, I used to roam around the streets and find a lot of artisans and suppliers to work with. It’s a good foundation for a fashion brand.”

Al Banna’s office and boutique are in a villa in a tranquil, palm-tree-lined residential neighbourhood in Sharjah, that you could easily miss. “Every time someone comes to my office, they’re shocked. They don’t expect it to be in this place in Sharjah,” she laughs. “When I first started I was looking for a place that was convenient and close to home, and I just stayed here.”

Ten years on, Al Banna has grown to become one the region’s most sought-after designers. Her designs have been seen on international celebrities and royals such as supermodel Bella Hadid, Bollywood star Sonam Kapoor, and twice on Queen Rania of Jordan. When it comes to Emirati women, Al Banna says she’s proud to see her designs on her friends and other women who embody her brand. She’d like to see her designs on HE Noura Al Kaabi, the UAE’s Minister of Culture and Knowledge Development, whose work and personality she admires.

Despite the many accolades, Al Banna still faces challenges, especially when it comes to production and maintaining quality. “There are so many factories in Sharjah that supply to huge brands internationally, but because we as young designers produce small quantities, there aren’t many factories out there that understand our quality. It would be great if we could get funding from the government to create a community centre for fashion designers in Sharjah, with different kinds of machines, top-notch artisans and embroiderers, to help us come up with sustainable ways to reduce waste,” she says.

Sustainability is woven into the fabric of her business. “We are very sustainable with our packaging. We work with dead stock, and we work with local factories. I never gave up on the artisans here,” she explains.

Al Banna is also passionate about supporting local initiatives. It was her collaboration with Mawaheb from Beautiful People, a Dubai-based art studio for adults with special needs, for her pre-Fall 2014 collection, inspired by the work of Mexican artist Frida Kahlo, that made her realise how she could combine illustrations with her innovative cuts and details to make each piece unique. It was the first time the designer had combined prints with her designs. “After that collection, we became all about prints,” she says.

There are many social messages that the young designer would like to explore in her future collections, especially those related to raising awareness about women’s health.

Al Banna doesn’t believe in forcing the creative process. “On weekends I switch off completely and forget that I’m a designer. I think it’s a blessing to completely switch off when I’m out of the office,” she says.

Even so, her switched-off mode informs her style. Her latest capsule collection is an extension of her wakesurfing collection launched last autumn, expanding on it but giving it a whole different mood.

Al Banna is excited about the emergence of new designers in the UAE and in the region, she advises them to find their voice and stick to it. “Stay persistent because it’s one of the hardest journeys to be on.”