Man of the Mountains

Mohammed Ahmed Ibrahim is one of the five—the UAE’s foremost group of pioneering contemporary artists. From his home in Khorfakkan, he produces instinctual art that speaks of his personal history. By Anna Seaman

ONLY ON A VISIT TO MOHAMMED Ahmed Ibrahim’s studio in Khorfakkan truly puts his prolific practice into perspective. Although he carries the label of the UAE’s foremost land artist, the term, which connotes an inextricable relationship between the environment and art, might not be immediately obvious when viewing his oddly bulbous and curiously formed sculptures, or indeed his somewhat obsessive series of paintings depicting only the torso and legs of a sitting man. In several other works, Ibrahim creates small, doodle-like characters repeated, often over large surfaces. Continually, his draughtsmanship returns to the simplest form of mark-making: the humble line. 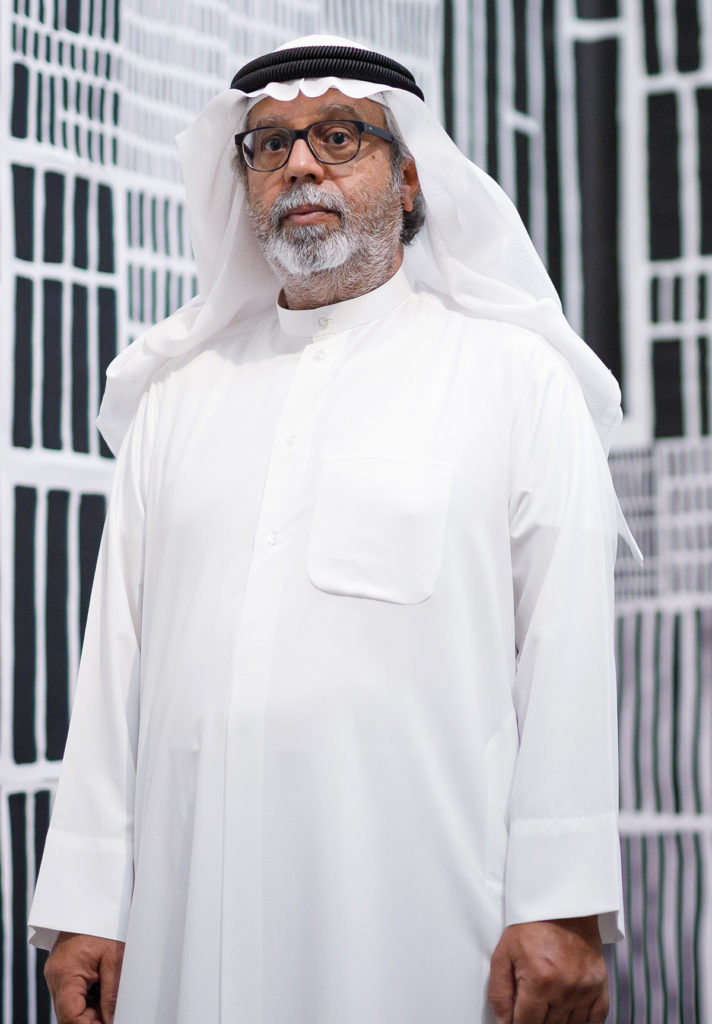 But witnessing the artist in his home studio, nestled in a horseshoe-shaped alcove of the imposing Hajar Mountains, is to see just how much the environment influences him.

“Place is very important to humanity,” he says. “Your personality is built by your environment.” Khorfakkan is a small enclave of Sharjah, on the UAE’s east coast where Ibrahim was born and raised. His life and his art all stem from his relationship to this town and the mountains, which surround the town on three sides; the fourth opens out to the Gulf of Oman. His art is invariably a direct response to this environment, from the installations made from foraged rocks wrapped in copper wire to the sculptures, fashioned from a papier-mâché mix of leaves, clay and soil and fused with natural pigments to create bright, almost garish colours.

“I never saw sunset throughout my childhood,” he says, explaining his use of colour. “It used to fall behind the mountain so that the final hour of the day was cast in a grey shadow. I felt that I had been robbed of the colours of sunset, so later I reclaimed them in my work.”

Even the shapes he uses are linked to his surroundings, whether external or internal. “What do they mean?” I ask. “If I knew the answer to that question, my dear,” says Ibrahim with a gentle smile, “then I would never make another piece of art again.”

Of course, I wasn’t really expecting an answer. Any artist who trots out a formulated response to these kinds of questions risks sounding prosaic, and Ibrahim is certainly not that. When probed, he recounts childhood memories. He tells me stories about his use of lines as coming from a time in his early youth when the man who delivered water to his house would mark up his visits in charcoal on the wall. Ibrahim would emulate the marks, sometimes causing confusion with the weekly billing system. He also remembers finding ancient cave drawings inside his beloved mountain range, which sparked an interest in pre-history and the desire to draw.

However, as an almost constant producer—he works up to 12 hours a day in the studio—Ibrahim does not spare much thought for his audience. Shying away from prescriptive interpretations, he says the best kind of viewer is one who doesn’t ask questions, only experiences the art at a subconscious level.

It is perhaps for this reason that he has had such an impact on the UAE’s contemporary art scene. Whilst working against the grain of the expected norms, Ibrahim and his contemporaries—Hassan and Hussein Sharif, Abdullah Al Saadi and Mohammed Kazem—were producing art for art’s sake, not for pleasing the crowds.

And indeed, they practiced in relative obscurity until just after the turn of the century when, in 2002, the Ludwig Forum for International Art in Aachen, Germany staged an exhibition titled The Art of the Five from the United Arab Emirates, bringing contemporary practices in Emirati art to the attention of a wider international audience. It also brought them their collective name—The Five.

It was a turning point and from then on all five raised their profiles. Ibrahim’s most notable recent shows were Elements, a career-long survey of his practice hosted by Sharjah Art Foundation, and The Space Between the Eyelid and the Eyeball, which ran from March 5 – May 9, 2019. The title refers to the meditative state that Ibrahim enters when making his art and is a nod to his exploration into the subconscious mind, a subject which has always fascinated him and which contributes to his universal appeal.

“I am interested in repetition and what happens to our minds when we do the same small thing over and over,” he says. “I purposely distract my thoughts when I am making art so that my hands are free to create. In that way, my art is as much a discovery to me as it is to those who encounter it.”