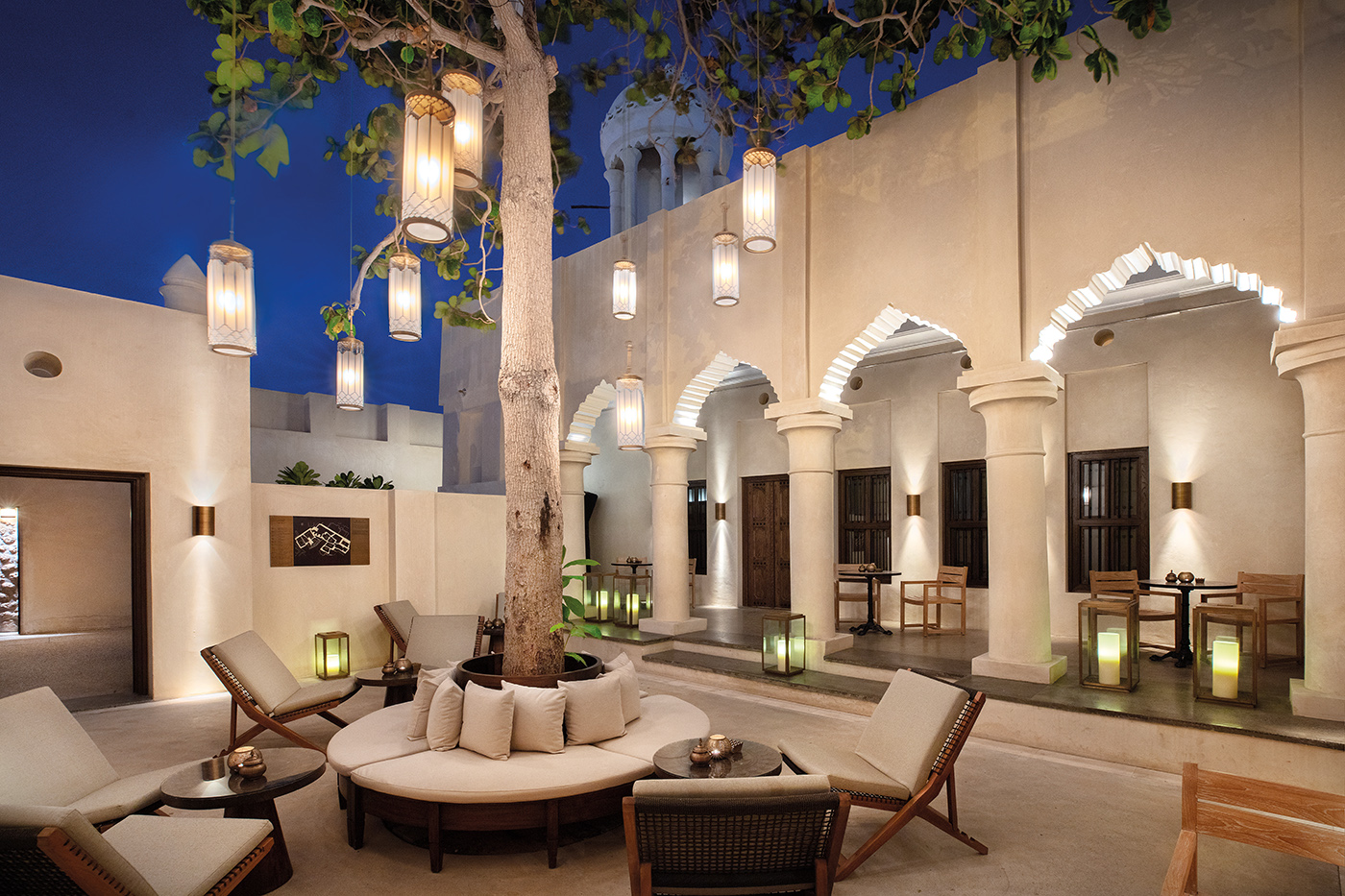 Al Bait is a luxurious boutique hotel that lives up to its name, 'The Home'. At least for a lucky few.

SPACE
Enter a dream from 1,001 Arabian Nights: Thick coral walls muffle the bustle of the city outside. In the courtyards, birds warble in the shade of trees. You navigate a warren of narrow alleyways, now private, that respect the same footprint from hundreds of years before. The cool interiors offer respite from the blinding Gulf sun, their harmonious furnishings made by local artisans’ hands.

Al Bait Sharjah feels like a luxurious home rather than a hotel. In fact, its name, Al Bait, means the home. At the heart of the 53-key, five-star boutique hotel are four historic houses that have been given a new lease on life.

Sharjah is less than half an hour’s drive  from the modern skyscrapers of Dubai, but it’s a world away. It is a modern city of 1.4 million, but it has also chosen to preserve its proud heritage. The Heart of Sharjah is the largest historical preservation and restoration project in the Gulf region aimed at restoring and revitalising the city’s heritage district. Al Bait is a major block in the project’s foundation. It is unusual for the region—not only is Al Bait a small, intimate hotel but it also is a jewel of history.

At Al Bait, “you feel like you’re stepping into Sharjah of the old days,” says Jacinda Raniolo, lead creative designer at Godwin Austen Johnson, a UK-based architecture and design firm with offices in the United Arab Emirates. “Visitors have a feel for the history of the place.”

The traditional Emirati home was private and sacred, centred on a desire for intimacy, she explains. Thick walls protect the private living spaces where the family gather to eat, sleep and relax.

“From the external souk, a passer-by would not know what lay inside,” Raniolo says. Indeed, right next door is the Souk Al Arsah, one of the oldest marketplaces in the UAE, which connects to one of the two public entrances to Al Bait. “Through the labyrinth of passageways, doors are rarely opposite each other or side by side to maintain privacy. And although the house may serve to isolate, the social ideal remains one of community that celebrates its hospitable culture.”

Raniolo created a narrative for Al Bait based on stories of journeys, migrations, families and sacred spaces in Emirati lifestyle. The Sharjah area developed from land and sea—the Bedouin nomads of the desert and the pearl diving communities of the coast—and each play roles in the hotel’s interiors, inspiring two schemes for the rooms’ designs. 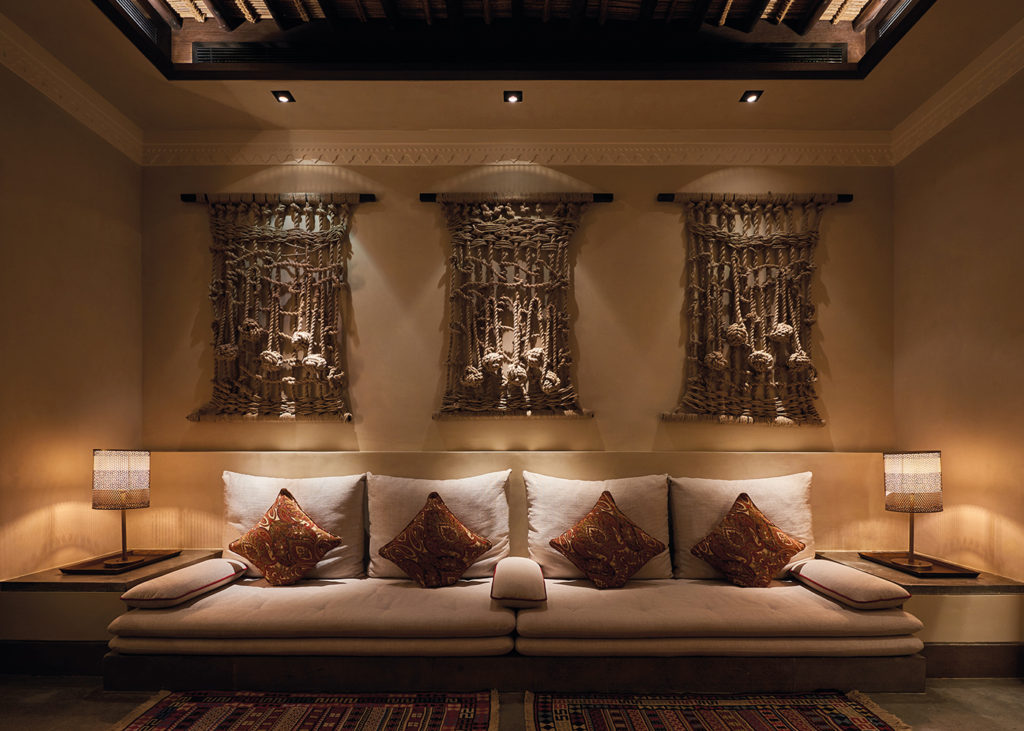 “The Bedouins carried their belongings in trunks. They also had rugs that they rolled up,” she says. Some rooms give a nod to the Bedouins with black and natural colours, stripes and vibrant deep reds that were common in the rugs. Accessories are made of handcrafted silver.

The sea influences others, with more natural colours, bronze detailing, and stripes and patterns that were found on surrounding shores. This is not international modern hotel décor, seen from Tokyo to Tashkent. Al Bait is the essence of Sharjah itself, on the most luxurious level.

“The original exterior walls had very small openings high up to help with ventilation and to ensure privacy. This also ensured the interior was shielded from the harsh sunlight which, in combination with the thick walls, helped create a cool, dark living space,” she says.

Inside and outside connect nonetheless. Especially in the cool of the evening, people would relax together in their courtyards. The guest rooms in the heritage building open to a central courtyard as they did in the past. Bedrooms in the new buildings open onto individual courtyards, to maintain guests’ privacy. The guest-room blocks all have a majlis seating element, whether internal or external.

“Courtyards were key to the design and we drew upon the Islamic culture of privacy where living quarters opened into interior courtyards,” Raniolo says. “They are quite intimate.”

Even in the desert, trees grow in the courtyards—pomegranate, neem, ziziphus, all bearing fruits. They offer dappled shade and home for birds whose songs vie with the call to prayer resounding from nearby mosques, almost the only sounds from the outside world to penetrate the Al Bait oasis.

Mosque minarets aren’t alone in peeking above the flat rooftops of the historic city centre. Barjeels, or wind towers, were an ancient form of air conditioning. The barjeel caught the prevailing wind and funnelled it down to the heart of the building, where it would travel over a pool of water that would cool the air further. Al Bait’s barjeel—original to the property—is unusual because it is round and decorated with pillars and lacey edges. It’s the only round wind tower in the UAE, says Keith Gavin, the project’s architect, also with Godwin Austen Johnson.

The hotel comprises 10 buildings covering 10,000 square metres. Four of the buildings were homes of the prominent Al Midfa family, restored from near-ruin. Six new buildings were designed to blend in, using the historic footprint of homes that had occupied the site, based on a satellite photo from the 1950s and photographs from the same period of other parts of what was then but a village, Gavin says.

Protecting the fragile coral walls and respecting the historic footprint created challenges for installing modern conveniences. Services such as electrical wiring and plumbing ran through trenches below the narrow alleyways, but ancient building techniques used piles of rocks as much as three times the thickness of the walls they supported, leaving little room for the trenches, Gavin says.

The local geography offered few building materials for inhabitants of yesteryear: coral for walls, a local lime-based mortar called djuss, mangrove and palm trees for beams, palm leaves woven into mats or into thatch for roofs. In a nod to this, the ceilings of all the guest rooms are areesh, made of stems of palm leaves, soaked and tied side by side using palm-fibre rope.

The old walls themselves were fragile. Coral is brittle and needs to breathe, but air conditioning makes that difficult because it creates a large difference between indoor and outdoor temperatures, increasing humidity. In addition, coral is no longer a sustainable material, so any coral was strictly reclaimed from ruins impossible to restore and used only to repair the heritage buildings.

The all-day-dining restaurant continues the link with the sea. Fishing baskets were the inspiration for decorative screens, pendant lights and wall sconces. The washed timber furniture includes subtle mother-of-pearl inlay details, a nod to the pearl-diving history, Raniolo says. At the same time, the feel is contemporary, as is the cuisine.

By contrast, the Arabic restaurant, which features Emirati and Levantine cuisine, emphasises the kinds of goods the nomads would have traded: thick rugs, sumptuous silk drapes, carved timber beams and rich tiled skirting.

The spa looks to the desert, with its calmly undulating dunes of sand and vast sea of stars above. Astrolabes—complex and elegant scientific equipment used by ancient Arab astronomers—hang in the spa’s reception, and the floor features astrolabe detailing in metal.

A library and a museum are other clues that Al Bait is no ordinary hotel. The museum includes artefacts from Ibrahim Al Midfa, the prominent businessman who once lived there. Al Midfa’s accomplishments include founding a newspaper as well as one of the first libraries in the Gulf. Active in pearl trading, public administration and philanthropy, the Al Midfa family held majlis, where cultural, political and intellectual issues would be discussed in the calm of the interior courtyards.

The same courtyards are abuzz again, keeping alive the international connections that made Sharjah a trading crossroads. 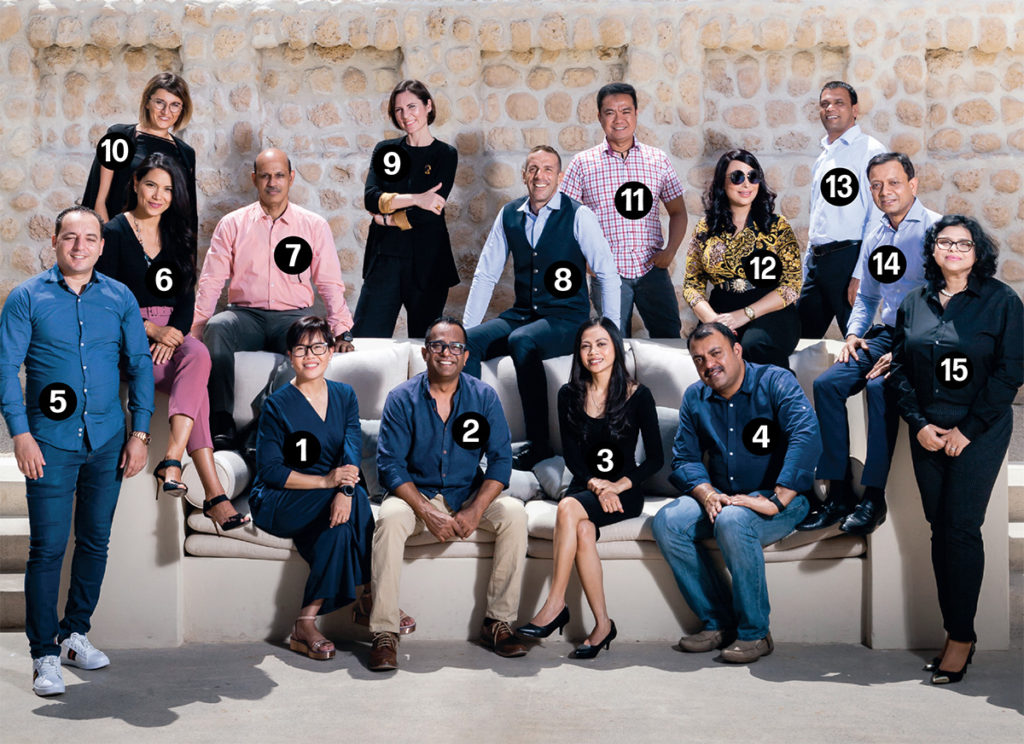 The Team That Makes a Hotel Feel Like Home

Al Bait Sharjah isn’t a typical hotel. It isn’t run typically, either. “I love my team,” says General Manager Patrick Moukarzel. “I give them a lot of empowerment.” Moukarzel interviewed 17 people for the front-office job. “You can teach people how to do a job but you can’t teach attitude. A good attitude was most important,” he says. The 187 staff—for just 53 rooms—include 32 nationalities, and guests are paired with staff who speak their language. All the better to pick up on personal preferences, to constantly customise the experience. “You can’t do that with 400 rooms,” he says.

Al Bait’s heart is a heritage family home, something that presented challenges in the transformation into a super-luxury hotel. The mattresses, at 210-by-200 centimetres, couldn’t fit through the doors of the heritage buildings. Since the historically significant doors couldn’t be changed, experts from the mattress maker flew in to disassemble and reassemble the mattresses. Moukarzel takes a moment to introduce us to his team.