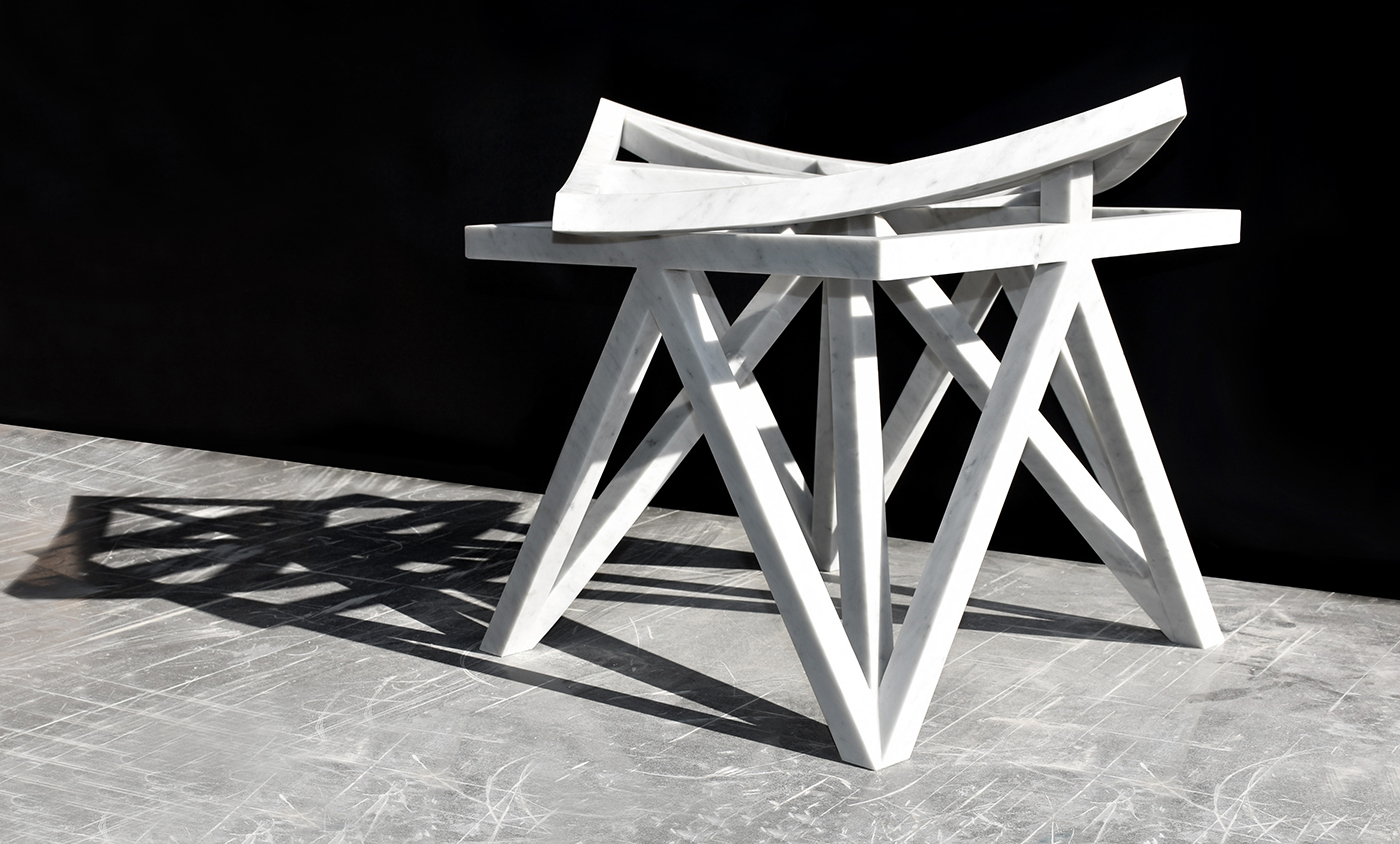 TAKING INSPIRATION FROM the country’s rich historical and cultural heritage and translating it into modern and sophisticated works of art. This is how one could best describe the creations of Dubai-based multidisciplinary designer, Aljoud Lootah. Her works, which explore the realm of product design, are one of a kind. Created from marble, leather or wood, each design tells a story.

Lootah’s background in graphic design has greatly influenced her use of intricate, complex, and geometric shapes. While now established as a product designer of regional renown, this was almost not the case. It was in 2012, while enrolled in the Design Road Professional Programme at Tashkeel—the Dubai-based art and design incubator—that Lootah decided she wanted to change direction, from a freelance graphic designer to a fully committed product designer.

Patterns and folds are central to Lootah’s work, which is notable for its experimental approach to materials and techniques and her passion for detail.

Her first product, the “Unfolding Unity Stool,” was launched at the end of the Tashkeel programme and showcased at Dubai Design Days 2013. The stool, part of the Double Square collection, explores traditional Arab geometric patterns and motifs. Two squares, one placed at a 45-degree rotation to the other, produce the Islamic eight-point star when viewed from above. Each piece in the collection was made from Carrara marble. “I was fascinated by turning 2D design into 3D objects, and it’s interesting to see how people react and relate to the story of each design,” Lootah says.

Technology has changed her design process immensely, digital sketches are now made on her iPad. “I start sketching preliminary ideas. The sketches are filtered to what I believe works best in terms of functionality and aesthetic appeal,” she says. Lootah then creates prototypes using 3D renders before undergoing final production.

Lootah has been involved in a number of projects that seek to interpret Emirati culture, fusing traditional craftsmanship with contemporary design. She commemorated the UAE’s founding father, the late Sheikh Zayed Bin Sultan Al Nahyan, last year with a product that people could interact with on a daily basis, an agenda. She called it “The Zayed Planner.”

“At our studio, we are all connected to our roots, we saw how the country developed over the years due to his wisdom. This was our inspiration and continues to be so with every product we design,” she says.

The Ministry of Culture and Knowledge Development asked her to create a welcome gift for Pope Francis’ visit in February. She produced the Mandoos collection.

“The idea of the gift was to translate how traditional mandoos chests were used in the past. They would always hold the most cherished belongings,” Lootah says. The exterior of the mandoos was made of woven camel leather that mimics the pattern of traditional khoos (palm) weaving.

A remarkable product Lootah designed this year was a fan for the Mandarin Oriental hotel in Jumeirah, Dubai. Here, she sought to blend the luxury brand’s signature logo with the mahaffa, a hand-held square fan used for cooling in the heat of the Emirati desert. Like the mandoos, the fan’s geometric pattern was inspired by khoos weaving. A twist of modernity was assured by the use of leather and brass. The fan now hangs in the lobby of the hotel.

“It takes inspiration from land and sea, the two historical sources of livelihood for the people of the UAE,” Lootah says. —FATMA AL MAHMOUD