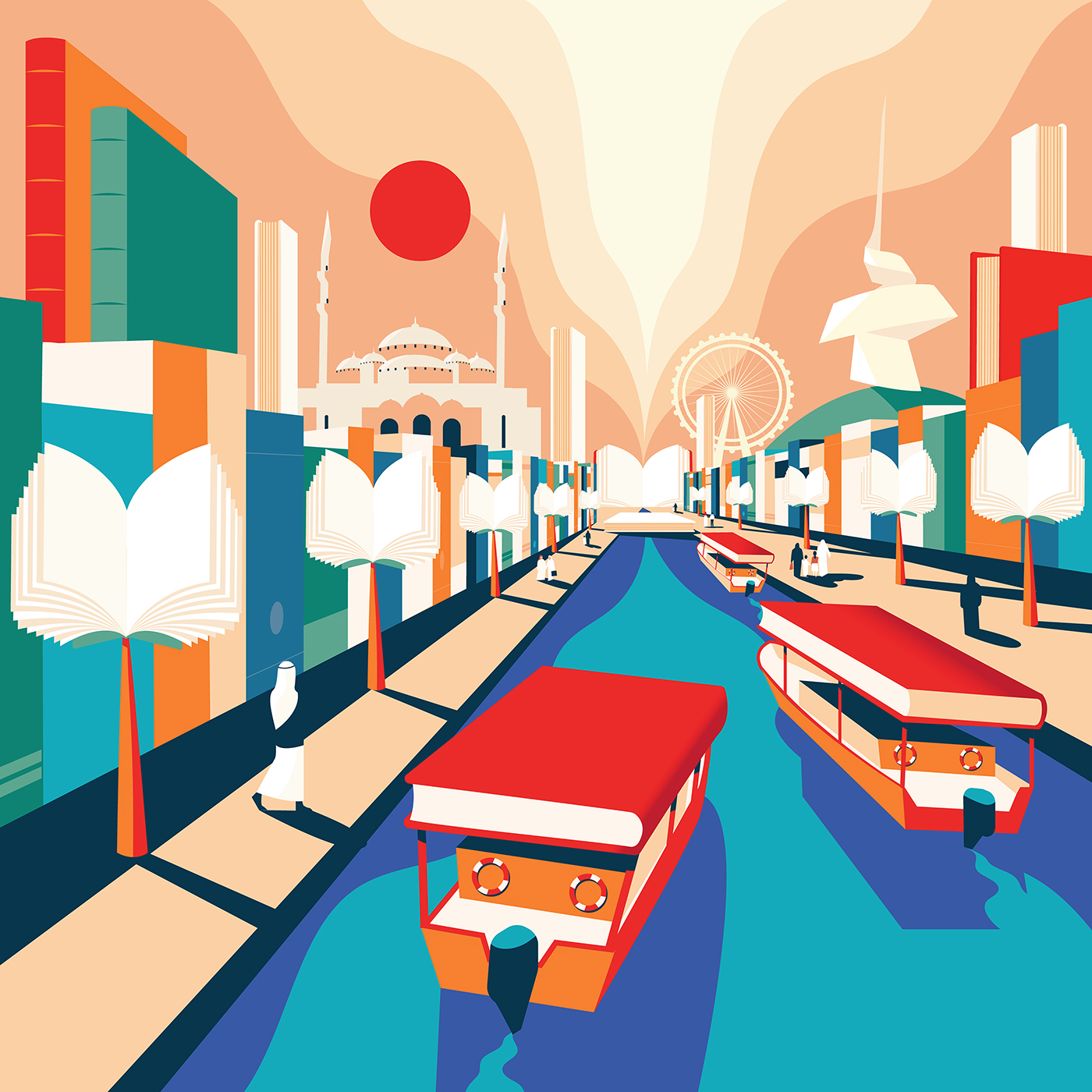 A Cultural and Literary Renaissance

SPACE
ARABIC IS ONE OF THE MOST
widely spoken languages in the world, the shared tongue from the Atlantic Ocean to the Arabian Gulf. Its rich literary culture dates back centuries. Sharjah is keeping this tradition alive while also moving it forward as it becomes a global publishing hub and pushes to make books available to all.

“This title reflects something important, and I hope the Arab world will take notice,” she says. “It reflects the beginning of our cultural and literary renaissance. It is a signal that Arab literature, which enriched the world in the past when most of the world was plunged into the dark ages, is coming back and it will add personality and diversity to world culture.”

One of the pearls of Arab literature, One Thousand and One Nights, was the theme of an eye-popping opening ceremony on World Book Day on April 23. It tells the tale of Scheherazade, the young bride who, to delay her husband putting her to death in the morning, tells him stories, all ending in cliffhangers. Rather than recount Scheherazade’s famous tales, the story jumps to an imagined Last Chapter in which, now elderly and dying, she tells one last story to her children, who then set off on adventures. 1001 Nights: The Last Chapter featured a cast of 557 people from 25 countries, a full orchestra and even horses, while weaving theatre, symphony and circus elements.

“It has to be about developing a human being who is capable of thinking, capable of communicating and capable of imagining. Everything we have been doing in Sharjah reflects this philosophy.”

At the opening ceremony, His Highness Sheikh Dr. Sultan Bin Mohamed Al Qasimi, the ruler of Sharjah, unveiled the Sharjah World Book Capital Monument, its spiral like an unfurling scroll, and plans for House of Wisdom, a library and cultural centre, to be designed by renowned UK architectural firm, Foster + Partners.

“It is not just about infinite production of profit,” Bodour Al Qasimi says. “It has to be about developing a human being who is capable of thinking, capable of communicating and capable of imagining. Everything we have been doing in Sharjah reflects this philosophy, and now more and more governments are taking notice and following suit. We are proud, and we are determined to keep playing a leading role in bringing books and literature to the centre of our lives.”

It was precisely this idea of making literature pervasive in society that clinched Sharjah’s bid to be World Book Capital. For UNESCO, books and reading are important to two overlapping missions: culture and education. Literature is important for individuals’ development, and literacy is important for the overall economy. “The panel was unanimous,” says Ian Denison, chief of the UNESCO Publications Unit. “Sharjah addressed how they promote and help communities to read, and how to develop the book industry on a sustainable basis,” which helped them seal the win.

As part of its proposal, Sharjah created programmes for multiple niches: women’s literacy, Braille and audio books for the visually impaired, literacy for prisons and rehabilitation centres, programmes for refugees in Syria and other places with natural and human disasters, reading for children and, especially, projects to get books to the migrant population in their native languages, such as Hindi, Urdu or Tagalog. Sharjah is home to many migrant workers, who make up close to 90% of the population of both the emirate and the UAE overall.

“The World Book Capital programme promotes social inclusion by empowering people with knowledge,” Al Qasimi says. “When we build communities that read, we open doors of intercultural understanding. This understanding becomes a wellspring for the promotion of cooperation, harmony and inclusion in community.”

The panel “chose Sharjah because of the innovative, comprehensive and inclusive nature of its application,” affirms José Borghino, secretary general of the IPA. “The focus on children and migrants was especially innovative.”

Rather than expect people who are not among the educated elites to seek out culture, Sharjah is bringing culture to these various communities, via mobile libraries and libraries in parks. One idea that honours local traditions is a mobile library set up as a Bedouin tent. “It makes it more exciting and engaging,” says Gerald Leitner, secretary general of the IFLA.

Another keystone project is “Knowledge Without Borders,” a government programme headed by Al Qasimi, which last year gave 42,000 families across Sharjah free home libraries of 50 fiction and non-fiction books. “That doesn’t happen without a government that is serious about culture,” Leitner says.

The government encourages a book culture in other ways, too. In 2017, it established an economic free zone for publishing, Sharjah Publishing City, with tax-free status and infrastructure from office space to warehouses and assistance with licensing, permits and more. 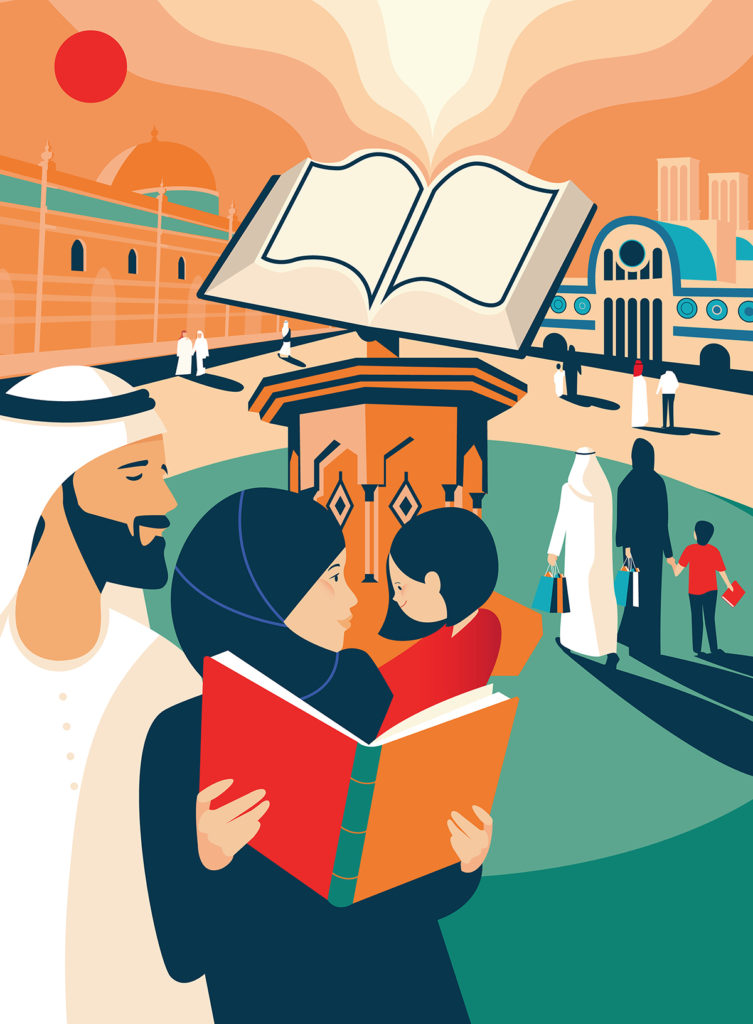 Sharjah also hosts an international book fair, the third largest in the world, and “the best book fair in the whole Arab region,” UNESCO’s Denison says. “Everybody from the region comes to buy books or negotiate rights.”

Indeed, Al Qasimi notes that The Handmaid’s Tale was just published in Arabic for the first time and sold out immediately at the Sharjah International Book Fair.

“What the UAE is trying to do is kickstart what amounts to a new publishing and literary hub,” Borghino says. “Each of the emirates has a focus, and Sharjah has decided it wants to be a knowledge economy. Books and reading are fundamental to that.”

Sharjah has a keen interest to take UAE and Arab literature to worldwide audiences. “Research and studies show that global audiences are thirsty for original and culturally diverse books,” Al Qasimi says. “We are hoping that our efforts to develop local and regional writers will help us supply the global market with literature and books from our part of the world.” The region’s governments have set up foundations and funds to help translate works into Arabic and from Arabic into other languages.

The World Book Capital is “an opportunity to remind people that historically the thing that marked the Arab world out was this celebration of knowledge and the democratic spread of knowledge. It’s a reminder that culture, creativity, thinking and knowledge have been, and continue to be, important,” says IFLA’s Leitner.

The diversity of the Arab world is one of its unique features that is reflected in its cultures in general and in Arabic literature in particular. “We share a common language,” Al Qasimi says. “Arabic bonds us as a medium of expression but zoom in on each country in the Arab world and you will find a fascinating diversity of origins and influences. That is its beauty, and that is also a source of richness that inspires different streams of creativity in Arabic poetry and literature. Standard Arabic has allowed us to cross-influence each other through literary means and has also allowed us to inspire each other despite our differences in the Arab World.”

That is true even for the youngest readers. In recent years, the region has undergone several transformations and there are topics and issues Arab children face in their daily lives everywhere. “I wanted these themes and recurring realities to be presented to our young readers in a way that resonated; and what is better than high-quality literature to develop their understanding of the world and the Arabic language itself?” Al Qasimi says. She established Kalimat Group in 2007 because there was a shortage of culturally relevant and entertaining stories for children written in the Arabic language.

Sharjah hosts an 11-day international reading festival for children and young adults. The annual festival celebrated its 11th year in April. “Reading, whether electronic or on paper, is an essential ingredient in creating a generation of leaders who are able to think on their own and who are confident in their identity,” Al Qasimi says. “Today a reader, tomorrow a leader.”