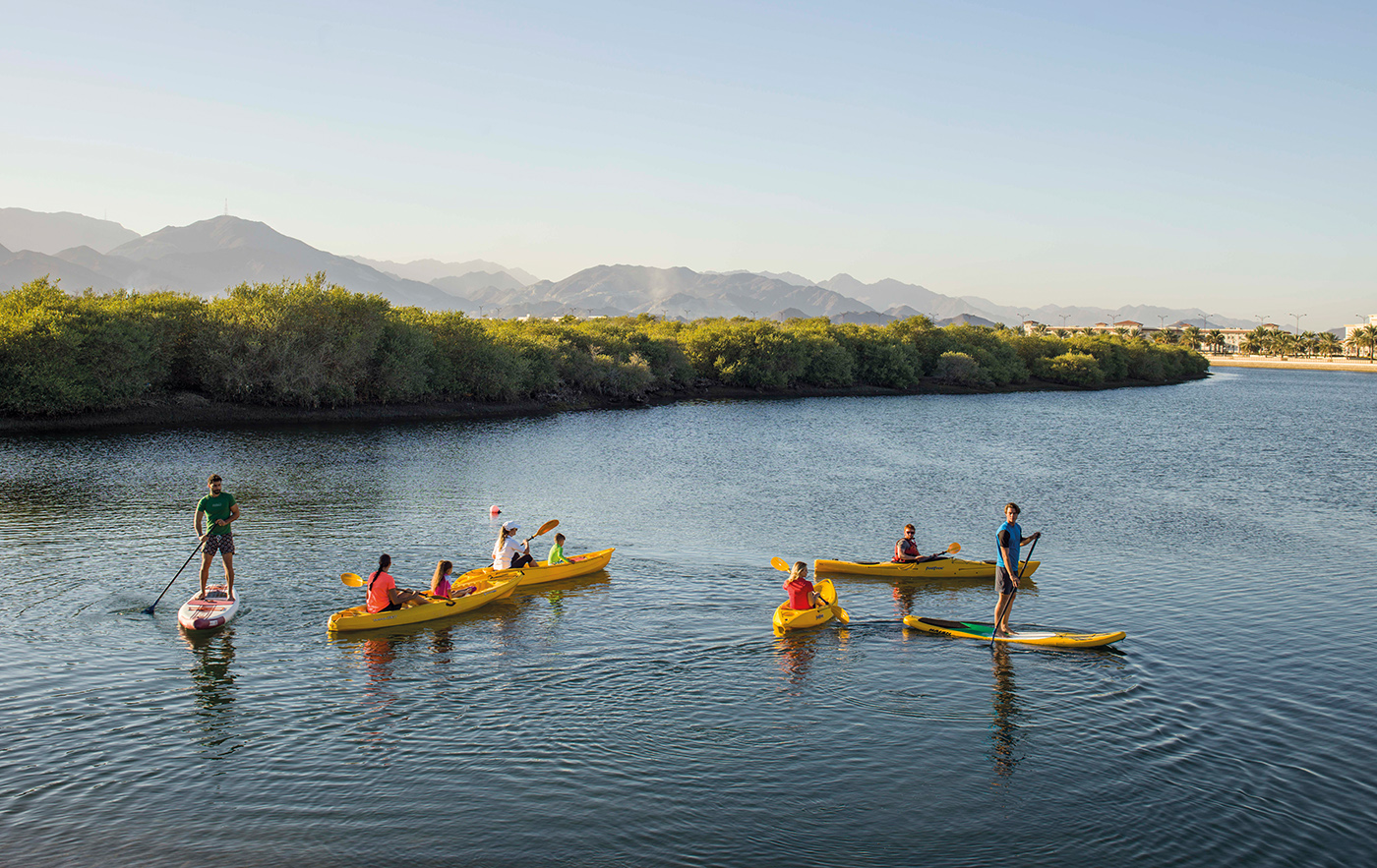 Sharjah's natural landscapes are diverse, rugged and protected. Leave the city behind and get back to nature.

SPACE
FOR MOST INTERNATIONAL visitors, the United Arab Emirates has a reputation for shopping malls and empty desert ripe for dune bashing in 4x4s. Yet during my four days exploring beyond its eponymous capital I discover Sharjah is working to protect and enhance a nature rich in wildlife and archaeology.

The striking thing about Wasit’s wetland is its proximity to urban Sharjah. Al Zaabi calls the wetland reserve “the green lungs of the city.” The lake is fed by groundwater from the mountains around Hatta and visited by 198 avian species yet lies in full view of surrounding skyscrapers. An Emirates jet flies over, prompting Al Zaabi to joke it is their “largest bird.” The lake’s mosaic of habitats, from papyrus reed beds to sabkhas (salt flats), are ringed by hides from where enthusiasts can spy flamingos or black-winged stilts. His Highness Sheikh Dr. Sultan bin
Mohamed Al Qasimi, the Ruler of Sharjah, imported acacia trees from Africa so the migratory grey herons might feel better at home.

Besides functioning like a gas station stopover for migratory birds, Wasit has a state-of-the-art wetland centre built in 2015 that accommodates some 60 species in enclosures with glass-fronted viewing panes. The enclosures replicate the habitats of the birds, such as an arid wadi setting preferred by the northern bald ibis and a lagoon where goliath herons with two-metre wingspans are breeding well. Some birds will be released, but for others Al Zaabi says it’s about maintaining genetic stock.

The animal I particularly want to see is the Arabian oryx, a graceful antelope that was almost hunted out of existence by the early 1970s, yet is now successfully reviving across the UAE due to captive breeding. To meet this rare oryx I travel an hour north of Sharjah city to an exquisite patch of flourishing desert.

This two-square-kilometre block of desert is managed by Sharjah’s Environment and Protected Areas Authority (EPAA) who are responsible for a dozen natural sites throughout Sharjah designated by Emiri decree. Ed Dhelaimah was given this accolade because of its protection of the emirate’s iconic ghaf tree. Indeed, Ed Dhelaimah roughly translates as the “dark place” on account of the unusually high density of ghaf found here. Amid the rolling dunes, this drought-tolerant tree forms little stands redolent with birdsong and casts cool chiaroscuro shade on the sand. Ghaf has been used by Arab people for centuries as fodder, timber, gum, and medicine, yet overgrazing and harvest have made such thickets rare.

“It’s beautiful here isn’t it?” says Brendan Whittington-Jones, a South African employed by EPAA to administer Ed Dhelaimah. He points out the stark difference of the bald dunes beyond the fence surrounding the reserve with the greened dunes inside. “This is what desert can look like if overgrazing by camels and goats is controlled.”

A while back this oasis of green, salt-tolerant vegetation was deemed suitable to support the release of two young male oryx. It’s a thrill to see this sleek pale-bodied antelope with unicorn-like horns in the wild, albeit inside a protected enclosure. They have been introduced from the nearby Breeding Centre for Endangered Arabian Wildlife where around 40 oryx have been reared. “It would be great to see them in the wider desert, but we’ll have to create a countryside able to sustain them so we must be pragmatic about expectations,” Whittington-Jones says. He adds that around 5% of Sharjah’s wilderness is currently protected but he could see this rising to 15%.

That afternoon I continue northwest, crossing Sharjah from coast to coast to another special landscape on the Gulf of Oman at Khor Kalba. A winding pass leads me through the Hajar Mountains: a scenic spine that ripples across the Eastern Arabian Peninsula and soars above 3,000 metres on Jebel Shams in Oman. The Hajars’ dramatic sawtooth range is one of the few places on Earth where ophiolite, the earth’s upper mantle, has been exposed by seismic uplift. The intensely weathered slopes resemble crumbling granola.

“Come and see these,” says Fadi Yaghmour, the EPAA’s Palestinian-born conservationist who manages Al Qurm Nature Reserve’s mangroves as I arrive at Khor Kalba. I hurry to a bridge at the reserve entrance where translucent seawater ebbs out from the mangroves to see a dozen juvenile green turtles, already the size of car tyres. “The mangroves are an important hatchery for young turtles to develop,” Yaghmour says as we watch them master the out-rushing tide. The piping call of a whimbrel bird fuses evocatively with a distant mosque’s adhan carried on the warm coastal breeze.

“Mangroves are hugely important for the sequestration of carbon and provide a nursery for small fish, which is important for the fishermen,” explains Yaghmour. He adds that the mangroves are also important for ecotourism. Since 2012, visitors have not been allowed into the reserve. “Dune-bashing with vehicles and overgrazing by camels was damaging the ecosystem, but we plan to allow environmentally friendly tourism like kayaking because we don’t want to alienate the locals by excluding them.”

Along the mangroves’ muddy shoreline, the burrows of some 50 crab species are revealed at low tide. A vivid flash of turquoise is a rare Arabian-collared kingfisher, a bird of the grey mangroves that feeds on the crabs. Yaghmour shows me the whorled shell of a marine snail that has a mucus covering its opening to protect the mollusc at low tide. “Travellers used to take these as a source of sealed fresh meat. That’s why you can find their shells in the desert,” he explains. The seawater channel meanwhile wriggles with shrimps, pupfish, and milk fish.

We return to the bridge, driving along the finest beach I’ve seen in the UAE. Al Qurm’s warm cocoa-coloured sand is pristine and framed only by the Hajar Mountains and not resorts. Yaghmour organises beach cleans to make sure it remains this way. Marine litter is a constant problem, with his own research showing 86% of examined green turtles have ingested plastic.

Yaghmour’s office is nearby at a centre I would urge all travellers to visit to marvel at wild Sharjah’s biodiversity. The Al Hefaiyah Mountain Conservation Centre hosts some 30 species within 12 square kilometres of enclosures. I generally pride myself on my wildlife knowledge but quickly experience an Arabian menagerie I’d never heard of, such as the woolly Arabian tahr goat and Gordon’s Wildcat. I also had no idea leopards once populated the UAE.

Yaghmour calls the centre a “genetic safety net” for endangered species like the Arabian wolves that are unable to be released back into the wild because of their potential for human conflict. The centre has a pair of leopards, a species not seen in the wild in the Emirates for a decade or so. “Leopards need huge ranges to hunt (around 170 square kilometres), so they may never be released but it’s  an aspiration so we must maintain a stock of them.”

“The more we understand about our rare species the more we realise how important Sharjah’s nature is,” says Yaghmour.

Leopards, many years ago, likely prowled the eye-catching mountains of Mleiha, halfway between the Gulf of Oman and Sharjah city. Its jebels rise like the triangular sails of dhows moored in an ocean of sand. Easily reached, just 45 kilometres from the city, the word “mleiha” is similar to “salt” in Arabic, a reflection perhaps of the area’s aridity, although the Bedouin interpretation along the lines of “woman’s beauty” conjures a more poetic exoticism.

The range acts as a barrier to prevailing winds and traps coloured banks of sand against limestone walls that were ocean-floor sediments some 70 million years ago beneath the now-lost Tethys Sea. Their shelter and springs facilitated a rich timeline of settlement.

I stop by Mleiha’s superb interpretation centre to meet an informative guide called Ajmal Hasan. He showed me around a museum packed with archaeological treasures. There is a holographic representation of the oldest stone tool found here, 125,000 years old, which dates it to the Palaeolithic Period. “This stone tool technology is similar to civilisations in Ethiopia. These early men probably crossed to the Arabian Peninsula when the Red Sea was narrower and shallower,” says Hasan.

Their Neolithic-era finds feature grave pieces such as an exquisite fishbone necklace dating back to the 5th millennium BCE. “They weren’t quite the club-wielding ogres we imagine from that era,” he laughs. The Bronze Age meanwhile is represented by an intriguing circular tomb called Umm An-Nar capable of storing 300 corpses.

By the Iron Age, desertification, likely triggered by a shift in Indian monsoonal patterns 3,000 years ago, had seen the water table fall, although this didn’t dampen human endeavour. Iron Age settlers created a remarkable network of irrigation channels excavated underground to nourish their crops from Mleiha’s mountain water reservoirs. Human civilisation persisted here and flourished with trade into the late Pre-Islamic era around 400 CE, their wealth exemplified by silver coins locally minted with Alexander the Great’s countenance and statues of Roman deities.

Yet Mleiha’s true wealth lies within its natural landscape. We take a 4×4 vehicle to a craggy escarpment in Jebel Faya where an overhang was the source of the 125,000-year-old stone tool. How can you be sure of its age as it has no organic matter to date, I wonder? “We use a technique called optically stimulated luminescence which can date when the object was last exposed to sunlight,” Hasan explains. Nearby, a bone-dry wadi’s cave tombs yield further important artefacts. It reminds me of walking into Luxor’s Valley of the Kings with a similar expectant air of finding antiquity but also, as I discover throughout Sharjah’s wilder locations, resilient ecosystems.

Finally, we drive through a sublimely smooth sea of dunes; their sensuous waves flux between hues of salmon pink and ripening peach. Among them is a fortress-like outlier called Fossil Rock. Its strata is packed with fractured spiralled seashells and gastropods dating tens of millions of years, confirming the outcrop’s marine origin. Sharjah’s natural diversity has been a long time in the making.

“Sharjah focuses much more on natural history and culture than the other emirates,” Hasan says. “There’s a wilder side to explore here than shopping in malls and dining in fancy restaurants.”