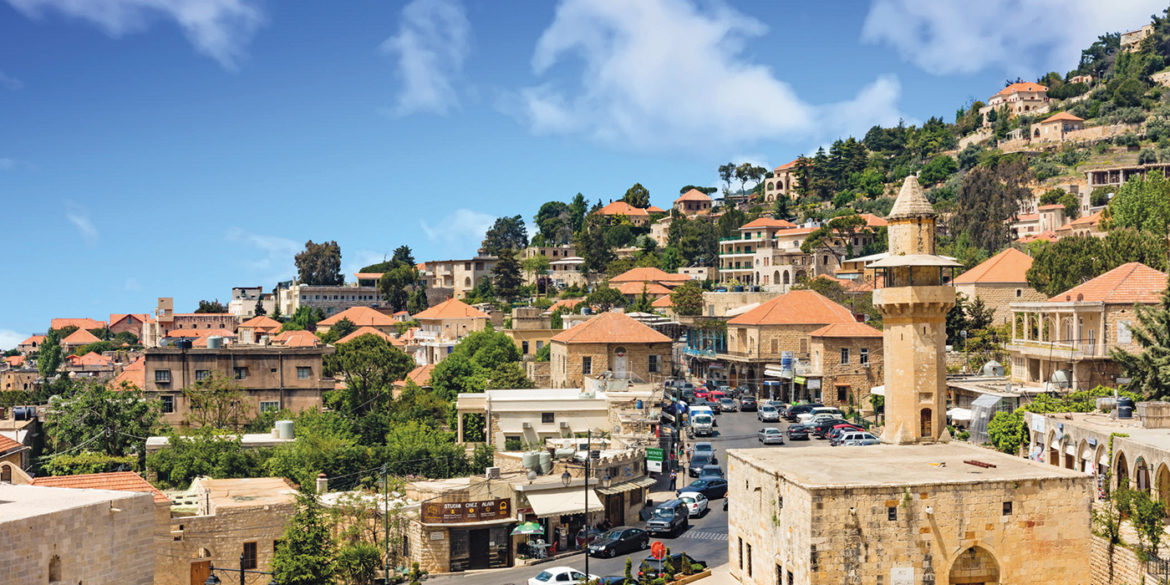 Beiteddine Palace is one of Lebanon's greatest treasures. Your starting point for an exploration of the tranquil Chouf Mountains.

SPACE
Two small girls perch on the stone steps of Beiteddine Palace, holding a mobile phone at arm’s length to snap a selfie. Behind them, children on a school trip scamper across the flagstones of a large sunlit courtyard, splashing each other with water from a traditional stone fountain. Built between 1788 and 1818 by Emir Bechir Chehab II, an Ottoman governor, Beiteddine Palace is one of Lebanon’s greatest treasures. Some 45 kilometres from Beirut in the Chouf Mountains, it is a masterpiece of traditional Arab architecture, featuring peaceful courtyards and gardens, soaring stone arcades, monumental gates surrounded by inlaid stonework and hand-carved wooden ceilings.

Having undergone extensive damage during the Lebanese civil war, the palace has been beautifully restored and today hosts a summer festival in the rectangular outer courtyard, attracting some 50,000 visitors every year in July and August. This year marks the 35th anniversary of the festival, which started during the war as an act of faith in Lebanon’s future. The opening act on July 18 will feature Oscar-winning Lebanese composer Gabriel Yared and singer Yasmina Joumblatt accompanied by the Lebanese Philharmonic Orchestra. Highlights are set to include a musical appearance by Gérard Depardieu, two performances of the hit musical Broken Wings, based on a novel by Lebanese author Khalil Gibran, and Moroccan singer Abdou Cherif performing beloved songs by Abdel Halim Hafez.

As magical as it is at night, the palace is well worth a visit during daylight hours, when traditional wooden mandaloun balconies, enclosed octagonal window seats, spill vivid splashes of red, green and yellow sunlight across patterned mosaic floors. Stunning reception rooms are filled with antique furniture and carved ceilings painted in rich jewel shades. The old stables below the palace feature an extensive collection of 4th and 5th century Byzantine mosaics, and the traditional hammam has a domed ceiling inset with small circles of coloured glass through which rays of light descend into the gloom.

Close to Beiteddine Palace is the village of Deir El Qamar, meaning “Monastery of the Moon.” Traditional stone houses with red-tiled roofs surround a lively town square, a popular place to enjoy a drink and some people watching. Deir El Qamar’s architecture encapsulates Lebanon’s diverse blend of faiths. Close to the square is the Fakhreddine Mosque, which is characterised by a beautiful octagonal minaret and dates from 1493. Nearby stands the Church of Saidat El Talle. Built in the 16th century, it is the third church to stand on this spot. The earliest iteration was built in the fifth century, atop the ruins of a Phoenician temple dedicated to the goddess Astarte. The village also has a synagogue, built in 1638, which is today used as a classroom by the French Cultural Centre.

Deir El Qamar is a wonderful place to delve into Lebanon’s culinary heritage and spend the night. Located a few minutes’ drive from the village is Beit El Qamar, a boutique hotel with cosy rustic décor that houses a branch of slow-food pioneer Kamal Mouzawak’s famous restaurant, Tawlet. During weekends and holidays, it serves a sumptuous buffet made by local women who grew up cooking traditional home food no longer served in most Lebanese restaurants. Alongside the traditional mezze staples—many of which are given a local twist—are main dishes passed down through the generations and unique to the Chouf region, made using local ingredients. Outdoor cooking stations serve skewers of grilled meat and hot falafel, crisp and light as air, beside rustic wooden tables set amid a shady garden. For dessert, there are cakes made with saffron and biscuits infused with dibs roman—tangy pomegranate molasses. The local specialty is tamriyyeh, thin sheets of filo pastry filled with semolina paste and flavoured with orange blossom and rose water, deep fried to order and topped with icing sugar.

The area is also home to Al-Shouf Cedar Nature Reserve, a swath of land covering 550 square kilometres, more than 5% the total area of Lebanon. With 250 kilometres of walking trails, it is famous for its majestic cedar trees, some of which date back 2,000 years. Surrounded by the fragrance of the towering cedars, the call of birds and the hum of insects, it’s easy to imagine Lebanon as it would once have looked.